Home Headlines Tesla stutters under tighter Shanghai lockdown; Beijing keeps hunting COVID
Editorial & Advertiser disclosure
Our website publishes news, press releases, opinion and advertorials on various financial organizations, products and services which are commissioned from various Companies, Organizations, PR agencies, Bloggers etc. These commissioned articles are commercial in nature. This is not to be considered as financial advice and should be considered only for information purposes. It does not reflect the views or opinion of our website and is not to be considered an endorsement or a recommendation. We cannot guarantee the accuracy or applicability of any information provided with respect to your individual or personal circumstances. Please seek Professional advice from a qualified professional before making any financial decisions. We link to various third-party websites, affiliate sales networks, and to our advertising partners websites. When you view or click on certain links available on our articles, our partners may compensate us for displaying the content to you or make a purchase or fill a form. This will not incur any additional charges to you. To make things simpler for you to identity or distinguish advertised or sponsored articles or links, you may consider all articles or links hosted on our site as a commercial article placement. We will not be responsible for any loss you may suffer as a result of any omission or inaccuracy on the website.
Headlines 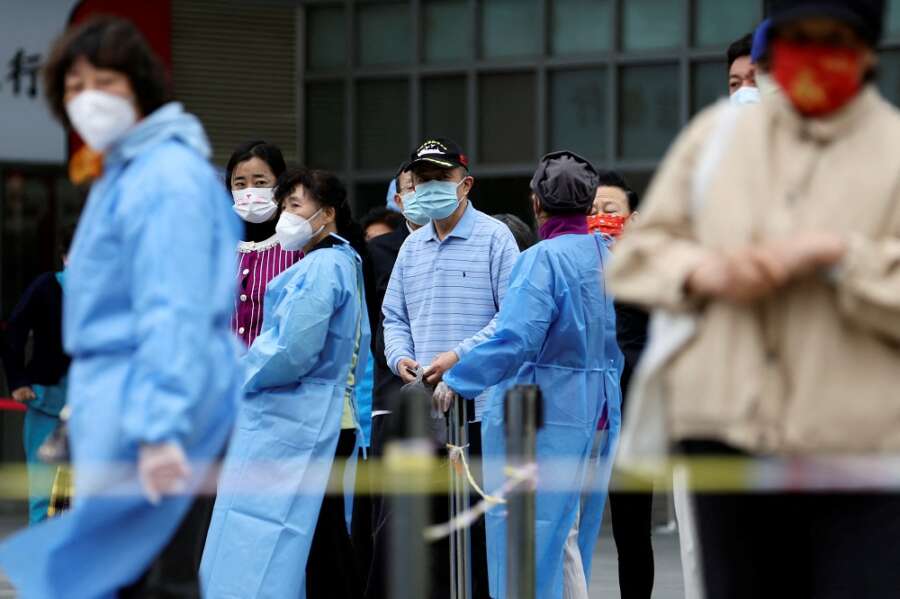 SHANGHAI/BEIJING (Reuters) -Tesla operated its Shanghai plant well below capacity on Tuesday, showing the problems factories face trying to ramp up output under a tightening COVID-19 lockdown, while China’s capital kept up its fight with a small but stubborn outbreak.

Many of the hundreds of companies reopening factories in Shanghai in recent weeks have faced challenges getting production lines back up to speed while keeping workers on-site in a “closed loop” system.

Even if they manage to get everything right, such firms depend on suppliers facing similar challenges.

The latest sign of the struggle trying to increase output under COVID rules came at Tesla’s Shanghai plant, where a resumption of work three weeks ago got extensive state media coverage as an example of what can be achieved despite restrictions.

The U.S. automaker has halted most of its production at the plant due to problems securing parts, according to an internal memo seen by Reuters.

Tesla had planned as late as last week to increase output to pre-lockdown levels by next week.

Among Tesla suppliers facing difficulties is wire harness maker Aptiv after infections were found among its employees, sources said on Monday.

COVID curbs in Shanghai, Beijing and dozens of other major manufacturing hubs across China are taking a heavy toll on the world’s second largest economy, with significant knock-on impacts on global trade and supply chains.

Uncertainty is high, with economists unable to say with any accuracy when the country will bring COVID under control and what the final cost is likely to be.

“Growth in China is likely to remain hostage to the course of the pandemic for most of the year,” analysts at Fathom Consulting said in a note.

Chinese stocks were just off two-year lows, and the yuan traded near 18-month lows on Tuesday.

Shanghai, a vital centre for commerce, finance and manufacturing for China and beyond with a population of 25 million, was enduring its sixth week of a city-wide lockdown.

The prolonged isolation increasingly jars with an outside world which is gradually returning to its pre-COVID way of life, even if cases spread.

China has threatened actions against critics of its “dynamic-zero COVID” policy, which it says aims to “put life first” and prevent a death toll like ones seen around the world.

Testing was becoming daily routine in much of Beijing and other places in China.

The capital has not seen its daily case numbers grow beyond several dozen since its latest outbreak began on April 22. But it has also found it difficult to bring them down significantly.

So restrictions have gradually tightened.

An area in the southwest of the capital on Monday banned residents from leaving their neighbourhoods and ordered all activity not related to virus prevention to stop.

Elsewhere, some residents have been told to work from home; dine-in services at restaurants were banned; parks, some malls and other venues were shut; some bus and subway routes were curtailed; isolated lockdowns were enforced on some buildings.

The number of new COVID cases in Shanghai has been falling for almost two weeks, but remains in the thousands and restrictions are tightening.

“We are still in a critical period of epidemic prevention,” said Sun Xiaodong, deputy director of the Municipal Centre for Disease Control.

The city was making what it hoped was a final push to end infections outside areas under the strictest curbs – the most significant gauge of whether the virus was being brought under control.

Many residential compounds have received notices that people would no longer be allowed out, having been able to go for brief walks or quick grocery trips previously.

In some cases, entire communities have been sent into quarantine after just one member tested positive.

A former Southern Weekender journalist, Lian Qingchuan, described in a WeChat post how he tried in vain for several days to convince authorities to let him visit his dying mother in another province without having to quarantine first.

His mother died before he could see her, which, he said, filled him with rage.

“I wanted to be a filial person, but they have turned me into an ungrateful person who is worse than a beast,â€ he wrote in the post, which was taken down soon after it appeared.

(Reporting by the Beijing and Shanghai bureaus; Writing by Marius Zaharia; Editing by Simon Cameron-Moore)

Explainer-What will a Marcos presidency in the Philippines look like?