Home Headlines Doctors, bankers protest ‘impossible situation’ as Sri Lanka runs out of fuel
Editorial & Advertiser disclosure
Our website publishes news, press releases, opinion and advertorials on various financial organizations, products and services which are commissioned from various Companies, Organizations, PR agencies, Bloggers etc. These commissioned articles are commercial in nature. This is not to be considered as financial advice and should be considered only for information purposes. It does not reflect the views or opinion of our website and is not to be considered an endorsement or a recommendation. We cannot guarantee the accuracy or applicability of any information provided with respect to your individual or personal circumstances. Please seek Professional advice from a qualified professional before making any financial decisions. We link to various third-party websites, affiliate sales networks, and to our advertising partners websites. When you view or click on certain links available on our articles, our partners may compensate us for displaying the content to you or make a purchase or fill a form. This will not incur any additional charges to you. To make things simpler for you to identity or distinguish advertised or sponsored articles or links, you may consider all articles or links hosted on our site as a commercial article placement. We will not be responsible for any loss you may suffer as a result of any omission or inaccuracy on the website.
Headlines 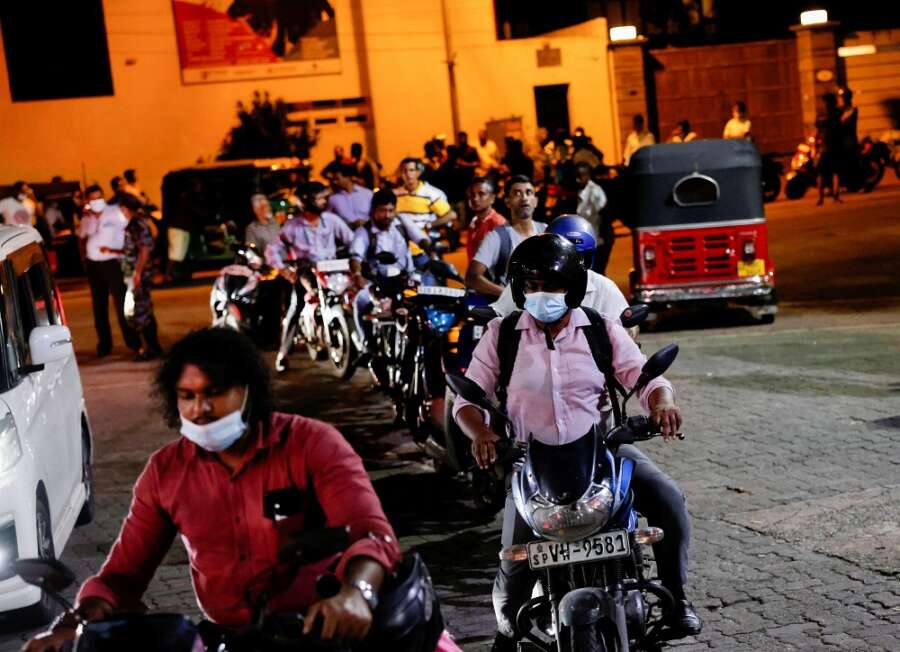 COLOMBO (Reuters) -Doctors and bankers were among hundreds of Sri Lankans who marched on Wednesday to demand the government resolve a severe fuel shortage at the heart of the Indian Ocean island’s worst economic crisis in decades or step down.

Weeks of street demonstrations against cascading woes such as power cuts and shortages of food and medicine brought a change in government last month after nine people were killed and about 300 injured in protests.

Left with just enough fuel for about a week and fresh shipments at least two weeks away, the government restricted supplies on Tuesday to essential services, such as trains, buses and the health sector, for two weeks.

The prime minister’s office said in a statement a government-ordered petrol shipment would arrive on July 22, while Lanka IOC, a unit of Indian Oil Corporation, is expecting a shipment of petrol and diesel around July 13.

“The government is also attempting to secure fuel shipments at an early date. However, until those are confirmed, the details would not be released,” the statement said.

Doctors, nurses and medical staff say that despite being designated essential workers, they struggle to find enough fuel to get to work.

“This is an impossible situation, the government has to give us a solution,” H.M. Mediwatta, secretary of one of Sri Lanka’s largest nursing unions, the All Island Nurses Union, told reporters.

The South Asian nation’s most serious economic crisis since independence from Britain in 1948 comes after COVID-19 battered the tourism-reliant economy and slashed remittances from overseas workers.

Rising oil prices, populist tax cuts and a seven-month ban on the import of chemical fertilisers last year that devastated agriculture have compounded the troubles.

President Gotabaya Rajapaksa said the World Bank had agreed to restructure 17 projects it is funding in Sri Lanka. Similar support extended earlier had been used to buy fuel and medicine.

“More World Bank assistance will follow after negotiations with the IMF are finalised,” he said on Twitter.

An International Monetary Fund team is in Colombo for talks on a bailout package of as much as $3 billion. Sri Lanka hopes to reach a staff-level agreement by Thursday, but even so, it is unlikely to bring immediate funds.

A march to the president’s house by a trade union of bankers, teachers, and the self-employed was stopped by riot police who had thrown up barricades to guard the area.

“Things have become unbearable for the common man,” said an official of a teachers’ union. “We want this government to go home.”

More than 100 medical staff of the national hospital in Colombo marched to the prime minister’s office calling for the government to ensure fresh supplies of fuel and medicines.

Public health inspectors and other health service workers are also on strike on Wednesday and Thursday.

The island of 22 million has nearly run out of useable foreign exchange reserves to import essentials such as food, medicine, petrol and diesel.

As the crisis grows, many people have been detained trying to flee the country by boat.

The government is also looking abroad for help, to countries from the Middle East to Russia.

On Tuesday, in a bid to secure fuel, Power and Energy Minister Kanchana Wijesekera met Qatar’s minister of state for energy affairs and the chief executive of Qatar Energy. He is also seeking a line of credit from a Qatar development fund.

Another Sri Lankan minister will travel to Russia at the weekend in search of energy deals.

NATO deal with Turkey greeted with caution and concern in Sweden