Home Finance Cryptoverse: Bitcoin wants to break its bond with stocks
Our website publishes news, press releases, opinion and advertorials on various financial organizations, products and services which are commissioned from various Companies, Organizations, PR agencies, Bloggers etc. These commissioned articles are commercial in nature. This is not to be considered as financial advice and should be considered only for information purposes. It does not reflect the views or opinion of our website and is not to be considered an endorsement or a recommendation. We cannot guarantee the accuracy or applicability of any information provided with respect to your individual or personal circumstances. Please seek Professional advice from a qualified professional before making any financial decisions. We link to various third-party websites, affiliate sales networks, and to our advertising partners websites. When you view or click on certain links available on our articles, our partners may compensate us for displaying the content to you or make a purchase or fill a form. This will not incur any additional charges to you. To make things simpler for you to identity or distinguish advertised or sponsored articles or links, you may consider all articles or links hosted on our site as a commercial article placement. We will not be responsible for any loss you may suffer as a result of any omission or inaccuracy on the website.
Finance

Cryptoverse: Bitcoin wants to break its bond with stocks 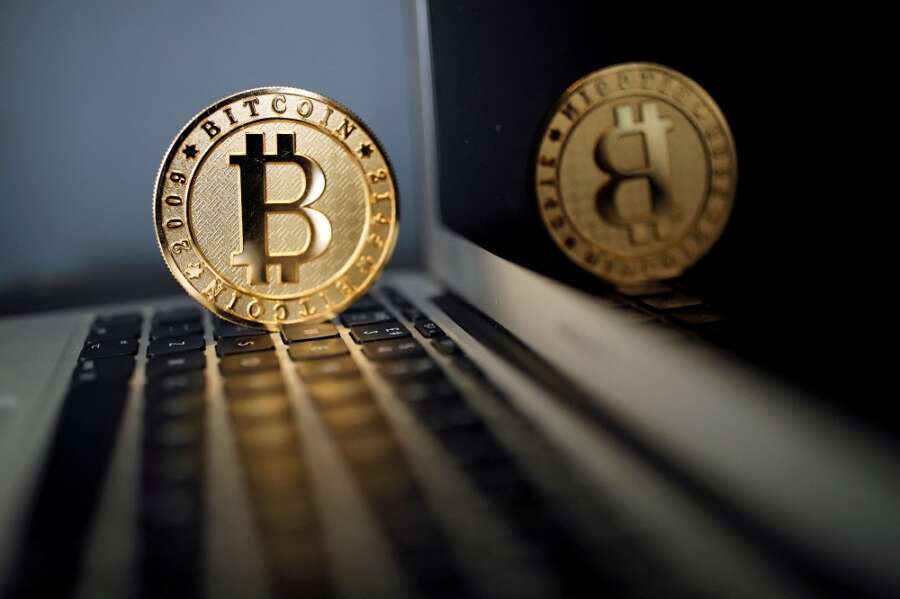 (Our weekly analysis of the wild world of cryptocurrencies. Repeats for additional subscribers)

(Reuters) – After months of tears and tantrums, bitcoin wants to split up with stock markets.

The cryptocurrency, which has been closely correlated with tech stocks for much of its torrid 2022, is staging one of its strongest efforts yet to break away.

Its 30-day correlation with the Nasdaq slid to 0.26 last week, its level lowest since early January, where a measure of 1 indicates the two assets are moving in lock step.

The correlation, which shows the degree to which the two move in sync with each other over a 30-day period, has hovered above 0.75 for much of the year and at times has approached perfect unison – at 0.96 and 0.93 in May and September.

For some crypto backers, any bitcoin break-up from Big Tech is a sign of strength.

“The latter’s growth has been somewhat tapped out, and investors are looking for the next growth industry. Bitcoin and crypto is one of those ‘next’ growth industries,” said Santiago Portela, CEO of FITCHIN, a Web3 gaming ecosystem.

The nascent uncoupling does indeed coincide with a period of comparative calm and consolidation for the teenage cryptocurrency a year after it began its epic nosedive from the heady heights of $69,000 hit in November last year.

Bitcoin is hovering near one-month highs around $20,500 and rose over 5% last week, outperforming the Nasdaq’s 2% gain as dour quarterly results from Microsoft, Alphabet, Meta and Amazon weighed. 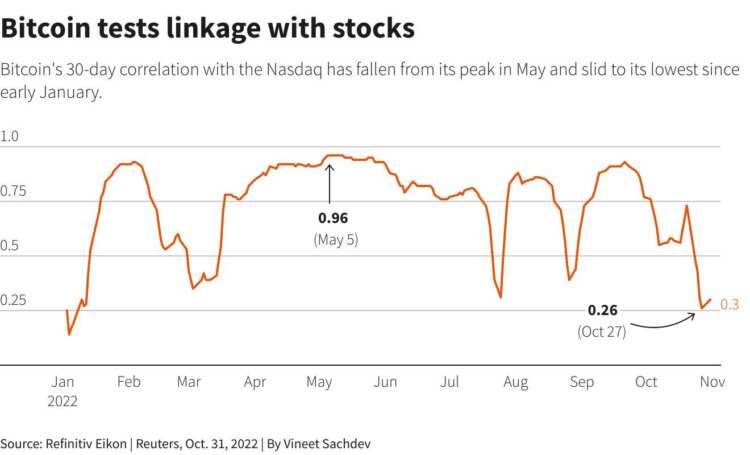 The crypto winter has been cold and hard, though.

The total market cap for cryptocurrencies has shrunk by more than two-thirds to $984 billion from nearly $3 trillion in November 2021, according to CoinMarketCap.com.

Market participation has also dwindled, with the average daily trading volume of digital asset products falling to $61.3 million as of Oct. 25, far from the daily volumes of around $700 million seen last November, CryptoCompare data shows.

Nonetheless, months of persistent selling has failed to shake out the old hands, who are digging in despite a grim economic backdrop.

The dollar wealth held in bitcoins that haven’t been traded for three months or more is at an all-time-high, indicating accumulation by long-term holders or “HODLers”, according to blockchain data firm Glassnode. The name for that group of diehard crypto investors emerged years ago from a trader misspelling “hold” on an online forum.

Furthermore, a record 55,000 bitcoin were withdrawn from the largest exchange Binance on Oct. 26, according to analytics platform CryptoQuant showed, flows that typically signal coins are moving to wallets for longer-term storage.

“The holder base of BTC has changed drastically from being heavily weighted towards speculators, which largely came in in 2021, to the near cult-like ‘HODLer’ community which would not sell their BTC in almost any macro circumstance,” said Stéphane Ouellette, CEO at crypto derivatives provider FRNT Financial.

“The market is now looking to the Fed meeting next week for further confirmation of the risk asset/BTC correlation breakdown.”

NEXT FOR FICKLE BITCOIN?

Samuel Reid, CEO of consulting firm Geometric Energy Corporation said heavy outflows from exchanges could potentially indicate some large buyers were “sniffing out” the end of the bear market.

Yet it’s anyone’s guess whether fickle bitcoin will begin to rally, or slide anew, or if it will swiftly rebound to the embrace of technology stocks.

For the foreseeable future, macroeconomics remain the driver of a market that remains highly speculative in nature.

“The more speculative crypto is, the more it is tied to macro,” said Alex Miller, CEO of blockchain firm Hiro Systems.

“It comes back to, what are the use cases and what’s the productive capability of the asset? The more it’s being used for other things, the less it’ll be tied to macro.”

German inflation rate to ease over course of 2023 – econ minister