Home Headlines Walmart’s long-lasting challenge: luring budget shoppers back to its stores
Our website publishes news, press releases, opinion and advertorials on various financial organizations, products and services which are commissioned from various Companies, Organizations, PR agencies, Bloggers etc. These commissioned articles are commercial in nature. This is not to be considered as financial advice and should be considered only for information purposes. It does not reflect the views or opinion of our website and is not to be considered an endorsement or a recommendation. We cannot guarantee the accuracy or applicability of any information provided with respect to your individual or personal circumstances. Please seek Professional advice from a qualified professional before making any financial decisions. We link to various third-party websites, affiliate sales networks, and to our advertising partners websites. When you view or click on certain links available on our articles, our partners may compensate us for displaying the content to you or make a purchase or fill a form. This will not incur any additional charges to you. To make things simpler for you to identity or distinguish advertised or sponsored articles or links, you may consider all articles or links hosted on our site as a commercial article placement. We will not be responsible for any loss you may suffer as a result of any omission or inaccuracy on the website.
Headlines

Walmart’s long-lasting challenge: luring budget shoppers back to its stores 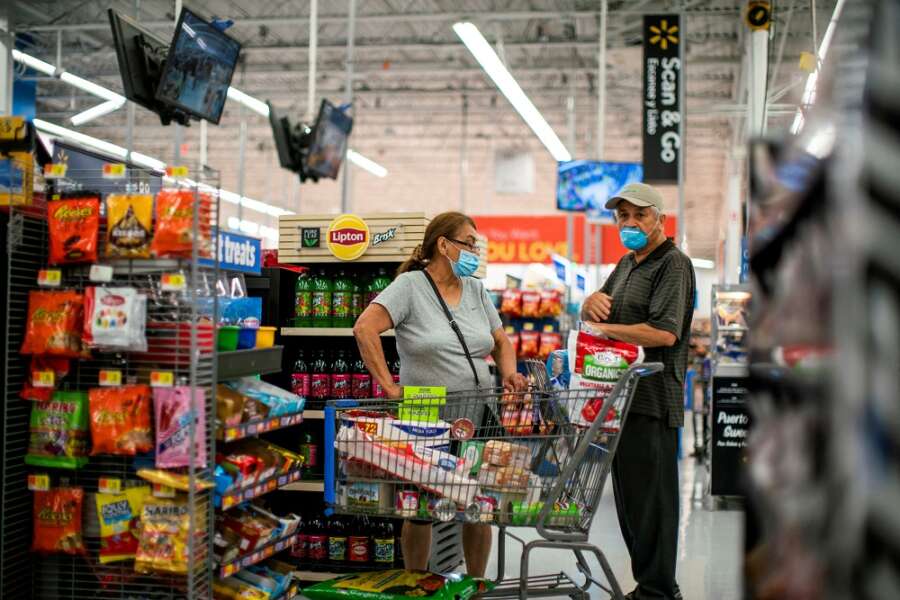 By Arriana McLymore and Siddharth Cavale

(Reuters) – Walmart Inc could face an uphill battle to reclaim U.S. shoppers who opted for the neighborhood dollar store or Aldi rather than driving farther to a Walmart Supercenter when gasoline was $5 a gallon.

While gasoline prices have dropped nearly 20% over the past month, there are no signs shoppers are returning to the nation’s biggest retailer, according to foot traffic data reviewed by Reuters and analysts.

Inflation remains at a 40-year high, devouring a large chunk of the grocery budgets of many Americans, especially Walmart’s legions of cost-conscious shoppers.

The question of how to reverse the loss in foot traffic will likely be a focus for analysts when Walmart reports second-quarter earnings on Aug. 16.

It may not be easy – or cheap. 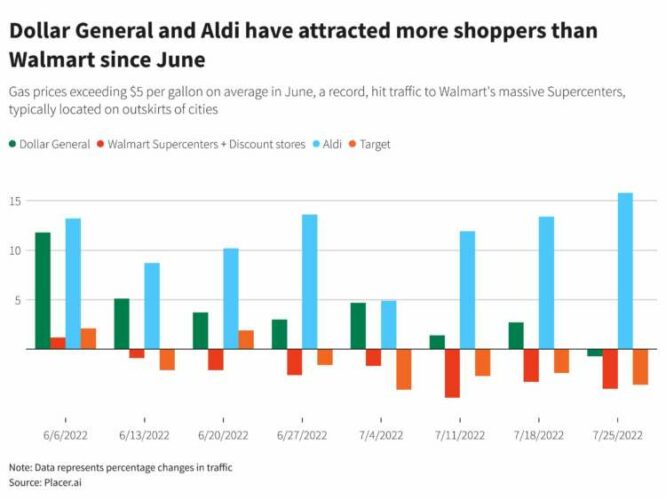 Cutting back on local newspaper ads has become Walmart’s “Achilles heel,” Flickinger said. If the company wants customers to return, Walmart must spend more money on “high-value ads” that highlight promotions and rollbacks.

Walmart shoppers have a median household income of $73,000, according to data from Numerator, a consumer insights firm.

In June, inflation reached 9.1%, a four-decade record, while gasoline prices soared to $5.006 a gallon on average (June 13), up from $3.161 a year earlier, according to the U.S. Energy Information Administration. Higher gas prices shaved hundreds of dollars off the monthly spending budgets of the typical low-income American, according to several economists.

Walmart CEO Doug McMillon has previously characterized the retailer as an “inflation-fighter” and a top destination for shoppers in recessionary periods. But Walmart’s share as the first choice for grocery purchases dropped to 25.5% in July, from 27.4% in June, according to a Prosper Insights & Analytics monthly consumer survey cited in a Cowen & Co note.

McMillon recently told investors that shoppers – especially from lower-income households – bought fewer items in the three months through April 30, even they also consolidated their trips to the store in response to higher fuel prices.

Monthly spending on gas in July rose to 5.57% of the income of a typical American household – which earns $5,412 per month post-tax – up from 2.79% of income in December 2019, according to GlobalData. Poorer households generally spend a bigger portion of their incomes on gas and essentials.

Walmart Supercenters, which average about 190,000 square feet (17,651.6 square meters) and sell groceries and deli items, alongside clothing, home products, and electronics, tend to be located outside of major metropolitan areas, requiring many shoppers to drive at least several miles. Supercenters do not sell gas.

Both Walmart and Target Corp issued profit warnings over the past two months, noting that U.S. shoppers responded to the rising cost of living by buying primarily lower-margin food and other essentials, while skipping aisles filled with clothes and sporting goods.

Walmart’s warning in late July was “a diagnostic look at the average American household,” Jefferies analyst Stephanie Wissink said. It showed the squeeze on shoppers’ monthly budgets that also led many to cut back on their trips to grocery stores, she said.

At Target’s 1,937 stores, traffic declined from mid-June through the week of July 25, Placer.ai data shows.

Shopper visits to Dollar General stores rose in all weeks of June and for most of July, versus the same period last year, the data shows. Dollar General operates more than 18,400 stores in the United States compared with Walmart’s 5,342 U.S stores, according to its latest annual filing.

Placer.ai did not provide data on other dollar store chains, such as Family Dollar and Dollar Tree. However, its quarterly index for dollar stores shows that foot traffic to discount stores in the second quarter increased 8% year-over-year and jumped 13.2% compared with the last quarter.

“The driving distance for a typical shopper across much of the U.S. may be twice as far to reach the nearest Walmart as compared to a dollar store,” Benowitz said.

Gas prices have surged since the beginning of 2022: https://fingfx.thomsonreuters.com/gfx/mkt/jnvwenxlovw/Prices-have-spiked-at-gas-stations-since-the-start-of-2022%20(1).png 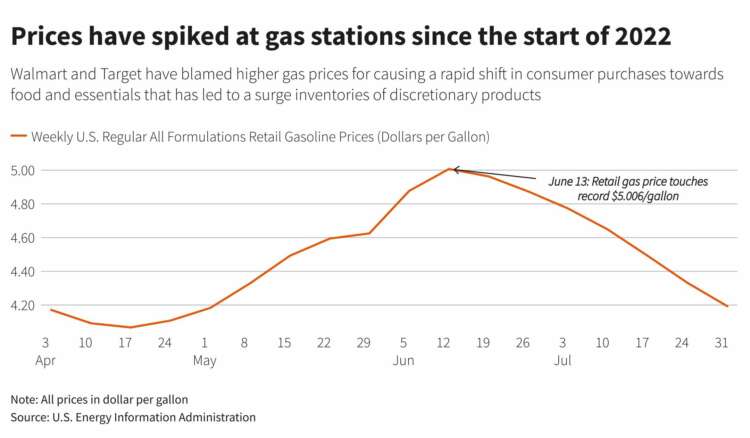