Home Headlines Upset by high prices, GM’s Cruise develops its own chips for self-driving cars
Our website publishes news, press releases, opinion and advertorials on various financial organizations, products and services which are commissioned from various Companies, Organizations, PR agencies, Bloggers etc. These commissioned articles are commercial in nature. This is not to be considered as financial advice and should be considered only for information purposes. It does not reflect the views or opinion of our website and is not to be considered an endorsement or a recommendation. We cannot guarantee the accuracy or applicability of any information provided with respect to your individual or personal circumstances. Please seek Professional advice from a qualified professional before making any financial decisions. We link to various third-party websites, affiliate sales networks, and to our advertising partners websites. When you view or click on certain links available on our articles, our partners may compensate us for displaying the content to you or make a purchase or fill a form. This will not incur any additional charges to you. To make things simpler for you to identity or distinguish advertised or sponsored articles or links, you may consider all articles or links hosted on our site as a commercial article placement. We will not be responsible for any loss you may suffer as a result of any omission or inaccuracy on the website.
Headlines 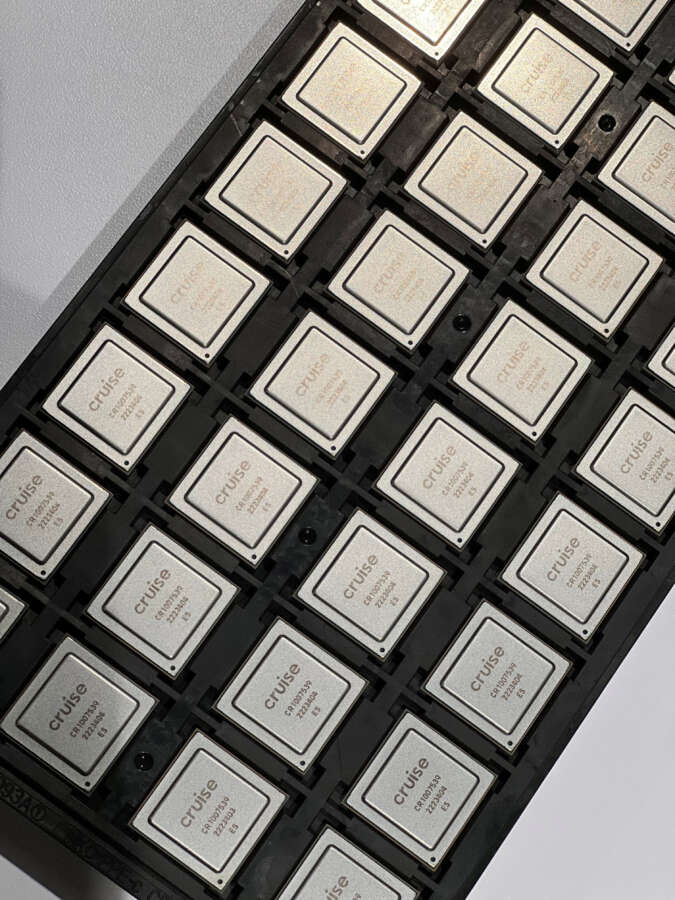 SAN FRANCISCO (Reuters) – General Motors’ autonomous driving unit Cruise has developed its own chips for self-driving cars to be deployed by 2025, as they aim to bring down costs and scale up volume, executives said Tuesday.

Cruise is taking a page out of Tesla’s playbook, switching from Nvidia Corp’s products to customized chips to power their vehicles.

“Two years ago, we were paying a lot of money for a GPU from a famous vendor,” Carl Jenkins, head of Cruise hardware, told Reuters in an apparent reference to Nvidia, a leading maker of graphics processing units, or GPUs.

“There is no negotiation because we’re tiny volume. We couldn’t negotiate at all. So that’s why I said, okay, then we have to take control of our own destiny,” he said during a tour of the Cruise R&D workshop in San Francisco.

Cruise executives this week for the first time have given details about its custom chips that will power its Origin vehicle with no pedals or steering wheel.

Jenkins said in-house chip development required investments, but this would be recouped by scaling up production of cars which use multiple chips. He declined to say how much the company was investing on the project.

Cruise CEO Kyle Vogt said on Monday the custom chips would help the Origin “hit that sweet spot from a cost perspective” in 2025 and personal ownership of autonomous vehicles would be viable from then on. That follows comments by GM CEO Mary Barra earlier this year that they would develop a “personal autonomous vehicle” by mid-decade.

Cruise had developed four in-house chips so far – a computing chip called Horta, the main brains of the car, Dune which processes data from the sensors, a chip for the radar, and one that it would announce later, Jenkins said.

Gaurav Gupta, a chip analyst at Gartner, said automakers were increasingly trying to design chips and systems in-house to have greater control over product development and supply chains.

“Will they be successful or not is a different question as it isn’t easy,” he said.

Ann Gui, Cruise’s silicon lead, said the Horta chip was based on an ARM processor as that was what was available when chip development started two years ago.

“But we are closely looking at RISC-V because they’re open source and it has a lot of benefits,” she said. ARM and RISC-V are rival instruction set architectures, a base for building chips that defines what kind of software can run on the chips.

Gui said the carmaker was working with an unidentified chip maker in Asia to produce its custom chips at scale.