Home News Stung by climate change: drought-weakened bee colonies shrink U.S. honey crop, threaten almonds
Editorial & Advertiser disclosure
Our website publishes news, press releases, opinion and advertorials on various financial organizations, products and services which are commissioned from various Companies, Organizations, PR agencies, Bloggers etc. These commissioned articles are commercial in nature. This is not to be considered as financial advice and should be considered only for information purposes. It does not reflect the views or opinion of our website and is not to be considered an endorsement or a recommendation. We cannot guarantee the accuracy or applicability of any information provided with respect to your individual or personal circumstances. Please seek Professional advice from a qualified professional before making any financial decisions. We link to various third-party websites, affiliate sales networks, and to our advertising partners websites. When you view or click on certain links available on our articles, our partners may compensate us for displaying the content to you or make a purchase or fill a form. This will not incur any additional charges to you. To make things simpler for you to identity or distinguish advertised or sponsored articles or links, you may consider all articles or links hosted on our site as a commercial article placement. We will not be responsible for any loss you may suffer as a result of any omission or inaccuracy on the website.
News 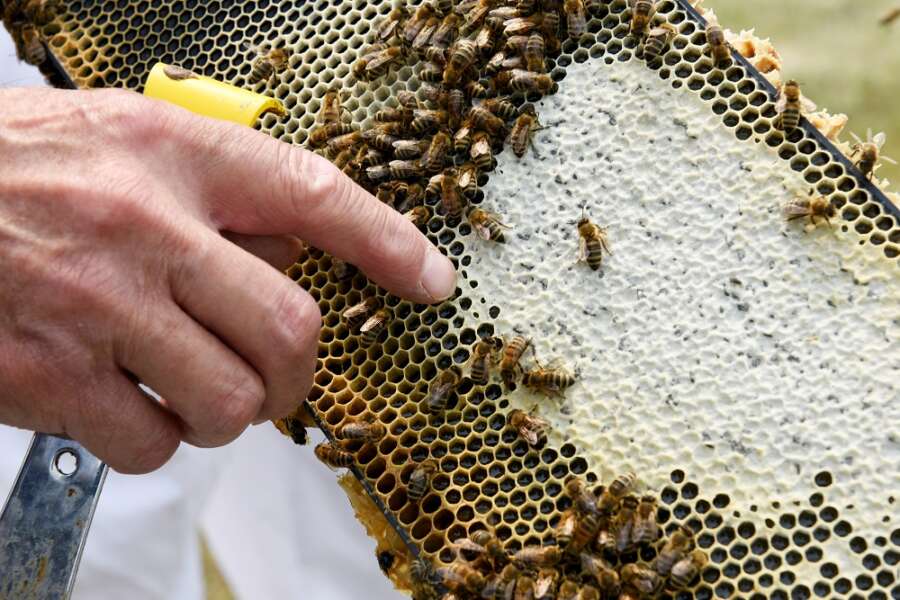 GACKLE, North Dakota (Reuters) – There was barely a buzz in the air as John Miller pried the lid off of a crate, one of several “bee boxes” stacked in eight neat piles beside a cattle grazing pasture outside Gackle, North Dakota.

“Nothing,” Miller said as he lifted a plastic hive frame from the box, squirming with only a few dozen bees. “Normally this would be dripping, full of honey. But not this year.”

A scorching drought is slashing honey production in North Dakota, the top producing state of the sweet syrup, and a shortage of bees needed to pollinate fruits and flowers puts West Coast cash crops like almonds, plums and apples at risk, according to more than a dozen interviews with farmers, bee experts, economists and farm industry groups.

Miller and other Midwestern apiarists haul their drought-weakened insects by truck to California almond farms in the winter to pollinate orchards in the top global producer of the nuts increasingly in demand for milk substitutes. Then they move on to other fruits.

The drought’s impact therefore will be felt far beyond North Dakota, where withered alfalfa fields and parched pastures usually teeming with sweet clover and gumweed are providing bees little nectar this summer.

The dearth of strong bee colonies and the resulting higher costs to lease them for pollination services will add to the challenges of West Coast growers already dealing with drought and, in California, soaring water costs. It could also add to soaring costs consumers are facing at grocery stores.

Scientists have linked weather extremes from severe heat to floods and droughts to climate change. Such weather events are rippling through the food chain, raising food costs and heaping economic pain on small-scale farmer — and devastating bee colonies.

The 2.7 million managed honey bee colonies in the United States, one in five of them in North Dakota, are crucial to pollinating scores of crops, including cherries and peaches as well as almonds and apples. Income from pollination services totaled $254 million in 2020, according to U.S. government data.

Many beekeepers produce honey during summer in the northern Midwest and Plains, where bees forage on pastures and rangelands, harvesting what honey the bees do not consume or stow away to nourish their young.

North and South Dakota, Montana and Minnesota accounted for 46% of all U.S. honey production last year, according to the U.S. Department of Agriculture (USDA).

Apiarists truck the bee hives to milder climates like California during the fall and winter, generating crucial income by leasing colonies to fruit and nut farms to pollinate crops.

Poor summer weather on the prairies has left colonies weakened, with fewer bees. A smaller amount of nectar also forces beekeepers to help feed their colonies with less nutritious sugar solution or corn syrup, an added expense for producers already hurt by a smaller honey harvest.

“What happens in North Dakota in August has a direct impact on what happens in California in February,” Miller said. “Weak colonies that lack sufficient stores of honey going into winter will not be in good shape for the upcoming almond bloom.”

Miller expects less than 30 pounds of harvestable honey per colony from his roughly 16,000 hives this summer, down from around 50 pounds in recent years and the least in his 52 years of records, as North Dakota suffers its worst drought since 1988, according to climatologists.

Beekeeper Dwight Gunter also expects less than half of his normal honey harvest this summer. Honey prices have increased about 15% to 20% so far this year as supplies tighten. Gunter’s farm near Towner, North Dakota, is in the driest part of the state, with his entire county under “exceptional” drought.

“Last fall, it was dry as a bone and we never got any rain in this area. No winter snow either,” he said. “The pollen flow this year has been considerably less.”

The drought is expected to weaken bee colonies across the region, said Joan Gunter, Dwight’s wife and the president of the American Beekeeping Federation.

“This is really going to affect bee health. We’re used to having good nutrition for the bees and they’re probably not going to get that this year,” she said.

Iowa-based cooperative Sioux Honey, which produces 20% to 25% of U.S. honey under the Sue Bee brand, estimates the drought could drag domestic production down 25% to as much as 40% this year. Some 75% of the cooperative’s honey comes from Montana, the Dakotas and Minnesota.

President and Chief Executive Mark Mammen worries that the drought will be a “double-edged sword” for his more than 200 producers as honey revenue drops and as weaker colonies may earn less from pollination services.

“Without pollination revenue, it would be very tough for beekeepers to survive these days.”

California’s drought-hit almond growers, who account for around 80% of global production, may be in for a shock come September or October as they negotiate pollination contracts for the upcoming season, said agricultural economist Brittney Goodrich, at the University of California at Davis.

Almond growers required about 2.5 million colonies last year to pollinate acres that have more than doubled in the last 15 years as demand for almond milk and health foods has grown. That represented around 88% of all managed U.S. hives, Goodrich said, adding that supplies of strong hives will remain tight this year.

“This certainly has the potential to impact almond yields,” she said.

Pollination services are among the largest input costs for almond farms, and those costs are set to rise at least 5% to 10% for the upcoming season, said Denise Qualls, pollination broker and founder of brokerage The Pollination Connection.

“I’m definitely concerned about there being enough bees for pollination,” Qualls said. “If growers want good, quality hives, they’re going to have to pay for them.”

Almond farmer Ben King has already seen his pollination cost rise from $210 per hive to $230 as demand for strong colonies has outpaced supply and beekeepers pass along their higher costs.

The drought, meanwhile, is tightening bee supplies further. King’s beekeeper will only guarantee him 675 hives for the upcoming season, down from the 700 he normally would rent for his groves near Arbuckle, California.