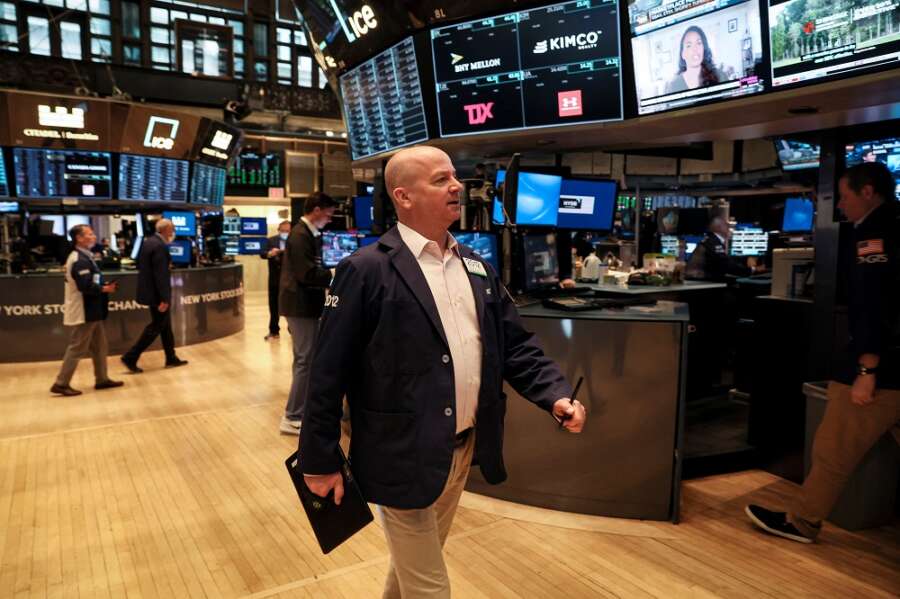 NEW YORK (Reuters) – Stock indexes around the world fell sharply on Monday and the dollar reversed course after hitting a two-decade high while oil prices sank as concerns about slowing growth and a tightened lockdown in Shanghai pushed investors toward safer bets.

After Friday’s bruising sell-off, U.S. stocks sold off sharply on Monday with investors rushing to protect themselves against the prospect of a weakening economy.

“With slowing growth, regardless of a recession or not, you’re going to see multiple compression for anything that’s growth related. It’s not necessarily an indictment of their fundamentals. It’s an indictment of their multiples,” said Michael James, managing director of equity trading at Wedbush Securities in Los Angeles.

“Markets are continuing to re-price inflation risks as it becomes more evident that inflation is likely to be with us for longer than some people had hoped,” said Chris Zaccarelli, chief investment officer at Independent Advisor Alliance in Charlotte, North Carolina, also citing increasing recession risks.

And he sees policy tightening around the world adding to economic “slowdown pressures that are already building due to the lockdowns in China and the war in Europe.”

On Monday the S&P hit its lowest level in more than a year while Nasdaq’s trough for the session so far was its lowest point since November 2020. Both the S&P and Nasdaq on Friday posted their fifth straight week of declines – their longest losing streaks in roughly a decade. [.N]

MSCI’s gauge of stocks across the globe shed 2.76% on Monday, hitting its lowest level since December 2020, while emerging market stocks lost 1.62%.

Investors were focused China’s zero-COVID policy, with Shanghai tightening the city-wide lockdown for 25 million residents. The policy prompted concerns about supply chain problems as many technology companies manufacture their products in China.

While Vladimir Putin on Monday exhorted Russians to battle, he was silent about plans for escalation of the war in Ukraine, where there was no let-up in fighting. Kyiv described a stepped-up Russian offensive in the east and a push to defeat Ukrainian troops in a steelworks in Mariupol. {nL2N2X1018]

With investors juggling so many worries, one place they were looking for safety was in the dollar index.

The index, which measures the dollar against a basket of currencies, had earlier risen 0.6%, hitting the latest in a string of 20-year highs.

Dollar strength also put pressure on Latin American stocks and currencies on Monday. The Mexican peso lost 1.00% versus the U.S. dollar at 20.36.

May 6, 2022
Editorial & Advertiser disclosureEditorial & Advertiser disclosureOur website provides you with information, news, press releases, Opinion and advertorials on various financial products and services. This is not to be considered as financial advice and should be considered only for information purposes. We cannot guarantee the accuracy or applicability of any information provided with respect to your individual or personal circumstances. Please seek Professional advice from a qualified professional before making any financial decisions. We link to various third party websites, affiliate sales networks, and may link to our advertising partners websites. Though we are tied up with various advertising and affiliate networks, this does not affect our analysis or opinion. When you view or click on certain links available on our articles, our partners may compensate us for displaying the content to you, or make a purchase or fill a form. This will not incur any additional charges to you. To make things simpler for you to identity or distinguish sponsored articles or links, you may consider all articles or links hosted on our site as a partner endorsed link.