Home Headlines Shanghai aims for June 1 return to normal as COVID lockdown batters economy
Our website publishes news, press releases, opinion and advertorials on various financial organizations, products and services which are commissioned from various Companies, Organizations, PR agencies, Bloggers etc. These commissioned articles are commercial in nature. This is not to be considered as financial advice and should be considered only for information purposes. It does not reflect the views or opinion of our website and is not to be considered an endorsement or a recommendation. We cannot guarantee the accuracy or applicability of any information provided with respect to your individual or personal circumstances. Please seek Professional advice from a qualified professional before making any financial decisions. We link to various third-party websites, affiliate sales networks, and to our advertising partners websites. When you view or click on certain links available on our articles, our partners may compensate us for displaying the content to you or make a purchase or fill a form. This will not incur any additional charges to you. To make things simpler for you to identity or distinguish advertised or sponsored articles or links, you may consider all articles or links hosted on our site as a commercial article placement. We will not be responsible for any loss you may suffer as a result of any omission or inaccuracy on the website.
Headlines 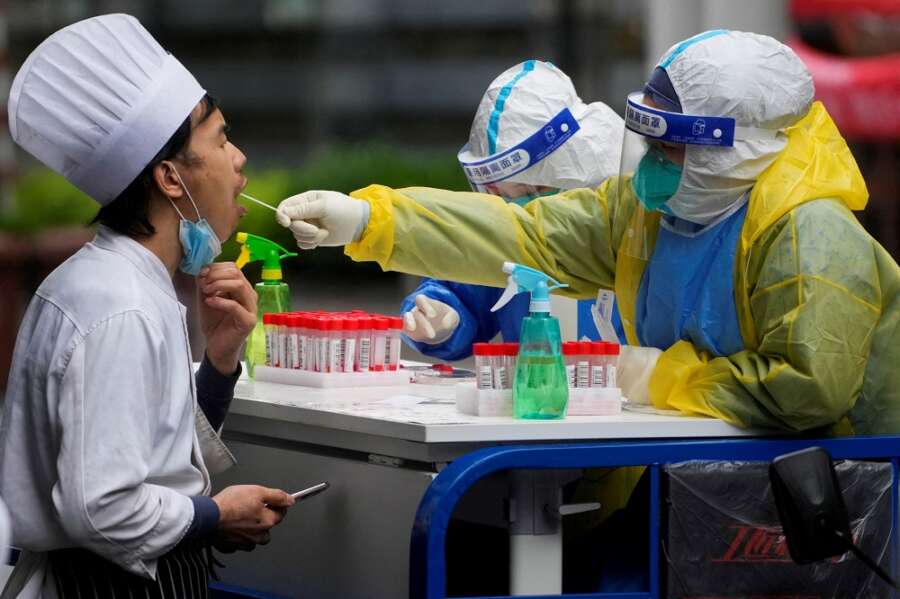 By Brenda Goh and Kevin Yao

SHANGHAI/BEIJING (Reuters) -Shanghai set out plans on Monday for the end of a painful COVID-19 lockdown that has lasted more than six weeks, heavily bruising China’s economy, and for the return of more normal life from June 1.

In the clearest timetable yet, Deputy Mayor Zong Ming said Shanghai would reopen in stages, with movement curbs largely to remain in place until May 21 to prevent a rebound in infections, before an easing.

“From June 1 to mid- and late June, as long as risks of a rebound in infections are controlled, we will fully implement epidemic prevention and control, normalize management, and fully restore normal production and life in the city,” she said.

But the announcement was met with scepticism by some Shanghai residents, who have been disappointed time and again by shifting schedules for the lifting of restrictions.

“Shanghai, Shanghai … am I still supposed to believe you?” one member of the public said on the Weibo social media platform.

The full lockdown of Shanghai and COVID curbs on hundreds of millions of consumers and workers in dozens of China’s cities have inflicted economic pain across a range of sectors, adding to fears the economy could shrink in the second quarter.

The restrictions, increasingly out of step with the rest of the world, which has been lifting COVID rules even as infections spread, are also sending shockwaves through global supply chains and international trade.

Data on Monday showed China’s industrial output and retail sales fell in April at the fastest in more than two years, missing expectations.

Economic activity has probably been improving somewhat in May, analysts say, and the government and central bank are expected to deploy more stimulus measures to speed things up.

But the strength and durability of the rebound are uncertain given China’s uncompromising “zero COVID” policy of eradicating outbreaks at just about any cost.

“The data paint a picture of a stalling economy and one in need of more aggressive stimulus and a rapid easing of COVID restrictions, neither of which are likely to be forthcoming anytime soon,” said Mitul Kotecha, head of emerging markets strategy at TD Securities.

In Beijing, the discovery of dozens of new COVID cases every day for the past three weeks shows how difficult it is to eliminate even small outbreaks.

The capital has not imposed a city-wide shutdown but has tightened curbs to the point that its road traffic levels last week were similar to those in locked-down Shanghai, according to data tracked by Chinese internet giant Baidu.

On Sunday, Beijing extended guidance to work from home in four districts. It has banned dine-in services at restaurants and curtailed public transport among other measures, fuelling frustration.

Videos circulating on social media overnight showed some students at Peking University demanding the removal of fences put up around some dormitories to block COVID. Reuters was unable to immediately verify the authenticity of the videos.

In Shanghai, the deputy mayor said the city would begin to re-open supermarkets, convenience stores and pharmacies from Monday but that restrictions on movement had to remain in place until at least May 21.

It is not clear how many businesses have reopened.

Throughout the lockdown, Shanghai has had to repeatedly dash hopes for an end to the ordeal. Authorities expected it to only last until April 5 when it was introduced on March 27.

Last week, many residential compounds got notices that they would be in “silent mode” for three days, which typically means not being able to leave the house and, in some cases, no deliveries. Another notice then said the silent period would be extended to May 20.

“Please don’t be lying to us this time” another Weibo user said, adding a crying emoji.

Shanghai reported fewer than 1,000 new cases for May 15, all inside areas under the strictest controls.

In relatively freer areas, the ones monitored to gauge progress in eradicating the outbreak, no new cases were found for a second day in a row.

A third day would usually mean “zero COVID” status has been achieved and restrictions can begin to ease. Fifteen of the city’s 16 districts had reached “zero COVID”.

(Reporting by Brenda Goh in Shanghai; Kevin Yao, Yifan Wang and Muyu Xu in Beijing; and the Beijing and Shanghai bureaus; Writing by Marius Zaharia; Editing by Robert Birsel)