Home Events Reed.co.uk switches to Corgis in Jubilee special ‘Love Mondays Again’ campaign, from isobel
Our website publishes news, press releases, opinion and advertorials on various financial organizations, products and services which are commissioned from various Companies, Organizations, PR agencies, Bloggers etc. These commissioned articles are commercial in nature. This is not to be considered as financial advice and should be considered only for information purposes. It does not reflect the views or opinion of our website and is not to be considered an endorsement or a recommendation. We cannot guarantee the accuracy or applicability of any information provided with respect to your individual or personal circumstances. Please seek Professional advice from a qualified professional before making any financial decisions. We link to various third-party websites, affiliate sales networks, and to our advertising partners websites. When you view or click on certain links available on our articles, our partners may compensate us for displaying the content to you or make a purchase or fill a form. This will not incur any additional charges to you. To make things simpler for you to identity or distinguish advertised or sponsored articles or links, you may consider all articles or links hosted on our site as a commercial article placement. We will not be responsible for any loss you may suffer as a result of any omission or inaccuracy on the website.
Events 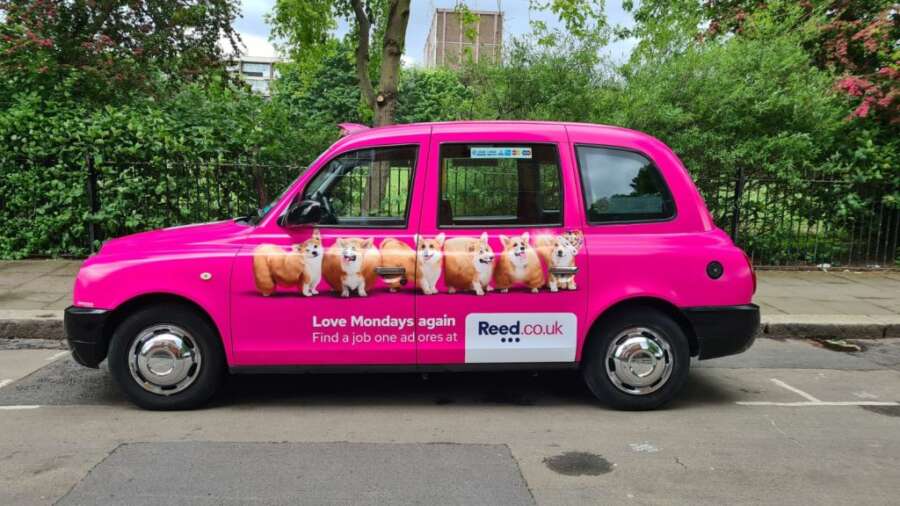 London – Thursday 26th May  :Reed.co.uk, one of the UK’s leading jobs and careers sites has launched a new campaign to celebrate the Queen’s Platinum Jubilee.

The campaign was created by independent creative agency isobel.

isobel’s first campaign for the recruiter, in 2021, featured fluffy Pomeranians spelling Monday, as well as Donuts and Lilos.

The Platinum Jubilee Corgis campaign will run across London, in bus and taxi wrap takeovers.

Reed is also partnering with the new Crossrail Elizabeth Line, as one of five partner brands launching the new line.  For the launch of the Elizabeth Line, animated versions of the Corgis will run on platforms, as well as carriage takeovers and station OOH.

The campaign features the celebratory Jubilee line, “Great job Ma’am”, and the CTA:  “Find a job one adores at Reed.co.uk”.

The campaign runs from Tuesday 24th May for 6 weeks.

James Reed, Chairman of Reed.co.uk, states: “The Queen has done an outstanding job as Head of State for 70 years, and as the UK’s leading job and career specialist, we wanted to joyously celebrate this moment. Our Pomeranians ‘Love Mondays’ campaign has performed very well for us and become a real people’s favourite, so a celebratory Corgis version seems perfect to mark this very special occasion. Great job, Ma’am!”

Rob Fletcher, Executive Creative Director at isobel, states: “Our initial Love Monday’s Again campaign is all about portraying Monday as something that people love.  So, switching from Pomeranians to Corgis to mark the Jubilee was a no brainer really.  Hopefully it will make people smile”.

Strategies for creating a successful company as a female entrepreneur

How to avoid career suicide at the office...

Brand Experience is back! Buddy Media and Match...

Admixer to join other leading industry players at...

How to use story-driven virtual events to inspire...