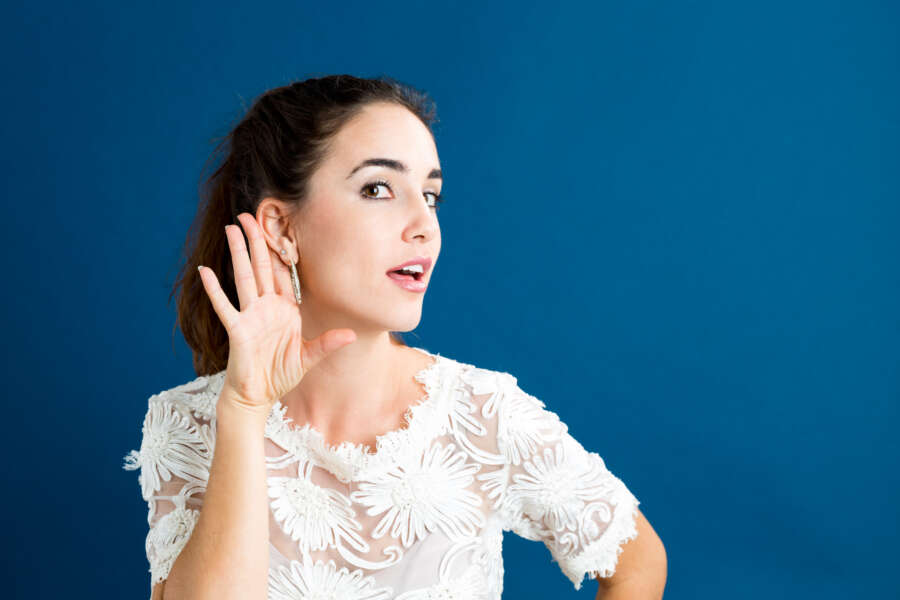 Survey uncovers denial of hearing loss which has frustrating consequences for family, friends and colleagues*.

Copenhagen, Denmark, July 30th, 2021. A third of Brits believe that they know someone who is in denial of their hearing loss, new research has revealed.

A study of 2,000 adults found that 40% thinks that one of their parents has become hard of hearing but are unwilling to admit that there is a problem. Over a quarter feel the same about a friend and 18% have a colleague who they believe isn’t recognizing that they are struggling to hear.

The research, which was commissioned by hearing aid expert, Oticon, also revealed that the most common signs that someone is struggling to hear include claiming that other people mumble, frequently asking people to repeat themselves, and having difficulty hearing conversations when there is background noise or when they are in a crowd.

Thomas Behrens, Chief of Audiology, Oticon said: “Understandably, admitting your hearing isn’t what it used to be is really hard for many people. It can also be difficult to realise that there is even a problem. Hearing loss can happen gradually, so you can get used to not being able to hear your own steps or the birds chirping. Sometimes, it isn’t until your partner or friends tell you that you keep saying ‘pardon’, that the TV is up really loud, or that you ask them to repeat everything, that you finally realise that there is a problem and need to seek support from a professional.”

More than seven in ten Brits that know someone they believe is in denial of hearing loss have communicated concern to their loved ones, according to the research. 47% have very directly told their loved ones that they think they have hearing loss, 41% regularly point out the signs of poor hearing that their loved ones are displaying, while 37% prefer a less direct approach and simply give subtle hints.

However, for many, the subject of hearing loss is taboo. Almost a quarter of those that haven’t expressed their concerns to a loved one who has bad hearing choose not to because they don’t feel comfortable to do so, while 42% don’t think they would even be listened to.

The research shows that working, living, and socialising with someone that is likely in denial of poor hearing can affect relationships. Over a third say that they are either frustrated with not being heard or fed up with having to repeat themselves. Another 21% feel ‘embarrassed’ by the hearing loss symptoms that their friends, colleagues or loved ones display, such as regularly asking people to repeat themselves, or not being able to follow conversations.

A quarter even go as far as avoiding conversations with the person that is having trouble hearing because it is easier, and another quarter say that their loved one’s hearing loss leads to arguments on the subject.

The problems with not treating your hearing loss

Brits seem willing to put up with hearing loss

Over a third of respondents that haven’t been professionally diagnosed with hearing loss say that they have problems hearing. Of those, 81% haven’t sought advice or treatment. Mostly, they are willing to wait until their hearing loss affects their quality of life or gets worse than it is now. Worryingly, 25% have no plans to seek treatment.

Thomas Behrens at Oticon concluded: “Potentially, millions of Brits don’t realise that they have hearing loss, or don’t want to admit it, but it is crucial to support a hearing problem as it could just help avoid the consequences for your health and help improve relationships. If poor hearing is affecting relations with loved ones, that is a very clear sign that it is time to take action.”

Making B2B brands iconic in their own right

Why Should Business Owners Use Guest Blogging Services?

May 4, 2021
Editorial & Advertiser disclosureEditorial & Advertiser disclosureOur website provides you with information, news, press releases, Opinion and advertorials on various financial products and services. This is not to be considered as financial advice and should be considered only for information purposes. We cannot guarantee the accuracy or applicability of any information provided with respect to your individual or personal circumstances. Please seek Professional advice from a qualified professional before making any financial decisions. We link to various third party websites, affiliate sales networks, and may link to our advertising partners websites. Though we are tied up with various advertising and affiliate networks, this does not affect our analysis or opinion. When you view or click on certain links available on our articles, our partners may compensate us for displaying the content to you, or make a purchase or fill a form. This will not incur any additional charges to you. To make things simpler for you to identity or distinguish sponsored articles or links, you may consider all articles or links hosted on our site as a partner endorsed link.