Home Headlines Macron, with eye on parliamentary vote, visits left-leaning Paris suburb
Editorial & Advertiser disclosure
Our website publishes news, press releases, opinion and advertorials on various financial organizations, products and services which are commissioned from various Companies, Organizations, PR agencies, Bloggers etc. These commissioned articles are commercial in nature. This is not to be considered as financial advice and should be considered only for information purposes. It does not reflect the views or opinion of our website and is not to be considered an endorsement or a recommendation. We cannot guarantee the accuracy or applicability of any information provided with respect to your individual or personal circumstances. Please seek Professional advice from a qualified professional before making any financial decisions. We link to various third-party websites, affiliate sales networks, and to our advertising partners websites. When you view or click on certain links available on our articles, our partners may compensate us for displaying the content to you or make a purchase or fill a form. This will not incur any additional charges to you. To make things simpler for you to identity or distinguish advertised or sponsored articles or links, you may consider all articles or links hosted on our site as a commercial article placement. We will not be responsible for any loss you may suffer as a result of any omission or inaccuracy on the website.
Headlines 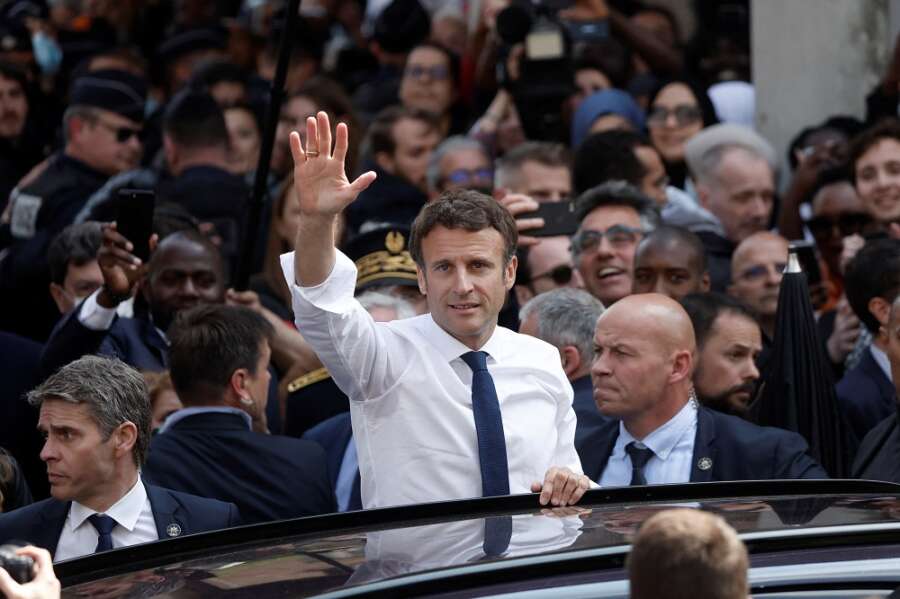 PARIS (Reuters) – French President Emmanuel Macron paid a surprise visit to a Socialist-held working-class suburb of Paris on Wednesday on his first official outing since his re-election, in an effort to woo left-wing voters ahead of June’s parliamentary vote.

Macron strolled around a food market in the town of Cergy, shaking hands, chatting with young people and posing with them for selfies, in what the Elysee palace said was a way to show he was “listening to people’s concerns, expectations and needs”.

Macron, a centrist, has long faced accusations of being too aloof and elitist, charges that discouraged some left-wing voters from backing him in Sunday’s runoff vote against far-right candidate Marine Le Pen.

“I want to give a message of respect and consideration to these areas that are among the poorest in the country right from the start of my new mandate,” Macron told reporters in Cergy, where far-left candidate Jean-Luc Melenchon won almost half of the votes in the first round of the presidential election.

Sources close to Macron say he needs to counter the challenge mounted by Melenchon for the parliamentary elections on June 12 and 19, a crucial hurdle which will determine the president’s ability to govern for the next five years.

Some 61% of voters prefer to see a majority of lawmakers opposed to Macron in the new assembly, according to an Elabe poll for BFM TV, although another poll earlier this week showed the president was on course to win an outright majority there.

Melenchon, who came a strong third in the first round of the presidential vote after Macron and Le Pen, wants to rally a union of the left to dominate parliament and force Macron into an awkward “cohabitation”.

Talks to that end seemed to make progress on Wednesday, with spokespersons for Melenchon’s France Unbowed party and the Socialist party, the former dominant force on the left whose presidential candidate got trounced, saying there seemed to be “no unbridgeable” differences in the way of an alliance.

This contrasted starkly with discussions on the other side of the political spectrum, with some members of the conservative Les Republicains (LR) being tempted by defection to Macron’s party, while others appeared to eye the far right.

“They are completely lost at LRs,” one conservative lawmaker told Reuters after a closed-door meeting on Tuesday.

Parliamentary elections will be fought over issues that have historically favoured the left.

The cost of living has emerged as voters’ number one priority in this year of elections, which coincide with sharp rises in food, energy and petrol prices partly caused by post-pandemic disruptions and by the war in Ukraine.

“The most basic stuff is now very, very expensive,” Mohammed Djae-Rachid, head of the local Comorian community, told Reuters TV. “Imagine that, a bottle of cooking oil used to cost one euro, now it’s three euros. All the stores are empty, it’s becoming very hard for everybody.”

Macron’s security detail at one point opened an umbrella to protect him against what appeared to be an attempt to pelt him with tomatoes on what was otherwise a friendly walkabout, where locals – many from an immigrant background – jostled excitedly to take pictures of themselves with the president.

Asked who he would name as his prime minister, Macron said cryptically: “I will name someone who is keen to work on social, environmental and productive issues.”

US, European shares rise as earnings mixed; euro dives to lowest since 2017