Home Headlines Glimmers of hope as global trade talks stretch into final day
Editorial & Advertiser disclosure
Our website publishes news, press releases, opinion and advertorials on various financial organizations, products and services which are commissioned from various Companies, Organizations, PR agencies, Bloggers etc. These commissioned articles are commercial in nature. This is not to be considered as financial advice and should be considered only for information purposes. It does not reflect the views or opinion of our website and is not to be considered an endorsement or a recommendation. We cannot guarantee the accuracy or applicability of any information provided with respect to your individual or personal circumstances. Please seek Professional advice from a qualified professional before making any financial decisions. We link to various third-party websites, affiliate sales networks, and to our advertising partners websites. When you view or click on certain links available on our articles, our partners may compensate us for displaying the content to you or make a purchase or fill a form. This will not incur any additional charges to you. To make things simpler for you to identity or distinguish advertised or sponsored articles or links, you may consider all articles or links hosted on our site as a commercial article placement. We will not be responsible for any loss you may suffer as a result of any omission or inaccuracy on the website.
Headlines 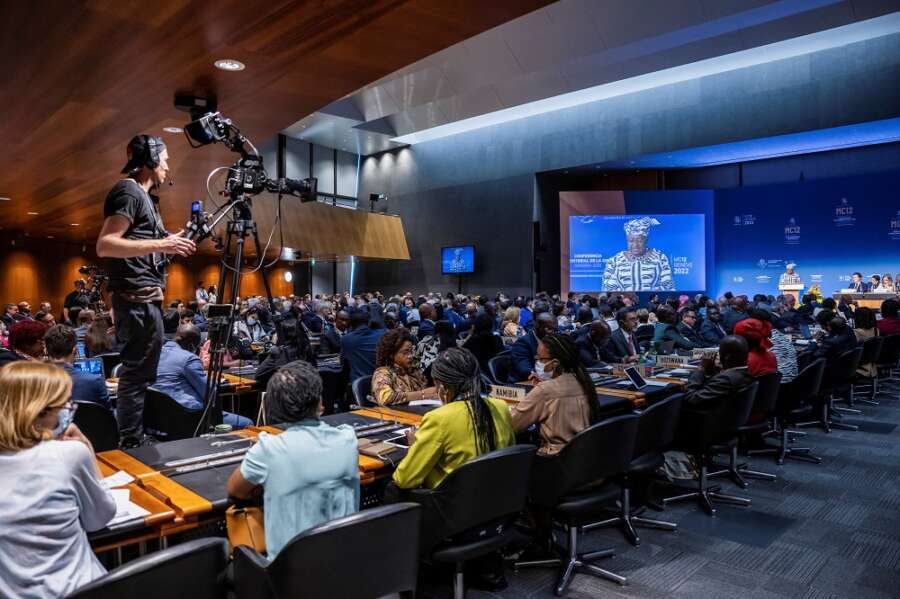 GENEVA (Reuters) -Negotiations at the World Trade Organization aimed at clinching deals on food security, fishing and vaccines entered their final hours on Thursday after all-night talks, with some trade sources hopeful that efforts to circumvent Indian opposition would succeed.

Ministers from more than 100 countries are meeting at the global trade watchdog’s headquarters in Geneva this week for the first time in more than four years to thrash out new trade rules — a feat many doubt in an era of high geopolitical tensions.

The body’s 164 members must all agree for new global trade rules to be passed, meaning that one member can block deals.

In the June 12-15 meeting, now prolonged until Thursday afternoon, that member has been India. New Delhi, which has a history of blocking multilateral negotiations, has stuck to long-held demands to maintain subsidies for fisheries and agriculture and pushed for extra carve-outs, trade sources say.

“India is strongly representing its perspective at the WTO to protect the future of every Indian and that of the marginalized,” he said on Twitter.

However, some delegates were more upbeat on Thursday, including on a package of deals with trade offs possible across the topics. EU trade commissioner Valdis Dombrovskis said they were “getting closer” in a tweet. WTO deputy director-general Anabel Gonzalez said she was “hopeful”.

Negotiators including U.S. Trade Representative Katherine Tai were involved in talks in the so-called ‘Green Room’ of the WTO most of the night trying to thrash out agreements. But Tai left early on Thursday, a U.S. official confirmed. Negotiations resumed around 0700 GMT and are ongoing with the conclusion due Thursday afternoon, trade sources said.

One of the possible outcomes of the talks is a pared-back version of a deal designed to curb fishing subsidies that cause over-fishing, a document seen by Reuters showed. Another is a waiver of intellectual property rights for COVID-19 vaccines and pledges to ease the food security crisis although tussles over the wording continued, sources said.

WTO officials have maintained throughout the meetings that deals can be reached, saying that talks often look hopeless until a final bargain comes together.

Observers expressed frustration with the process.

“The ministerial (conference) laid bare the increasing dysfunction that inhibits collective action at the WTO,” said Jake Colvin, president of the National Foreign Trade Council, adding that members should not reward “obstructionism”.

(Reporting by Emma Farge; Additional reporting by Andrea Shalal in Washington and Phil Blenkinsop in Brussels; Editing by Raju Gopalakrishnan and Alison Williams)

Central banks opt for shock and awe to tame inflation