Home Headlines Factbox-What impact will strike at Britain’s busiest container port have?
Editorial & Advertiser disclosure
Our website publishes news, press releases, opinion and advertorials on various financial organizations, products and services which are commissioned from various Companies, Organizations, PR agencies, Bloggers etc. These commissioned articles are commercial in nature. This is not to be considered as financial advice and should be considered only for information purposes. It does not reflect the views or opinion of our website and is not to be considered an endorsement or a recommendation. We cannot guarantee the accuracy or applicability of any information provided with respect to your individual or personal circumstances. Please seek Professional advice from a qualified professional before making any financial decisions. We link to various third-party websites, affiliate sales networks, and to our advertising partners websites. When you view or click on certain links available on our articles, our partners may compensate us for displaying the content to you or make a purchase or fill a form. This will not incur any additional charges to you. To make things simpler for you to identity or distinguish advertised or sponsored articles or links, you may consider all articles or links hosted on our site as a commercial article placement. We will not be responsible for any loss you may suffer as a result of any omission or inaccuracy on the website.
Headlines

Factbox-What impact will strike at Britain’s busiest container port have? 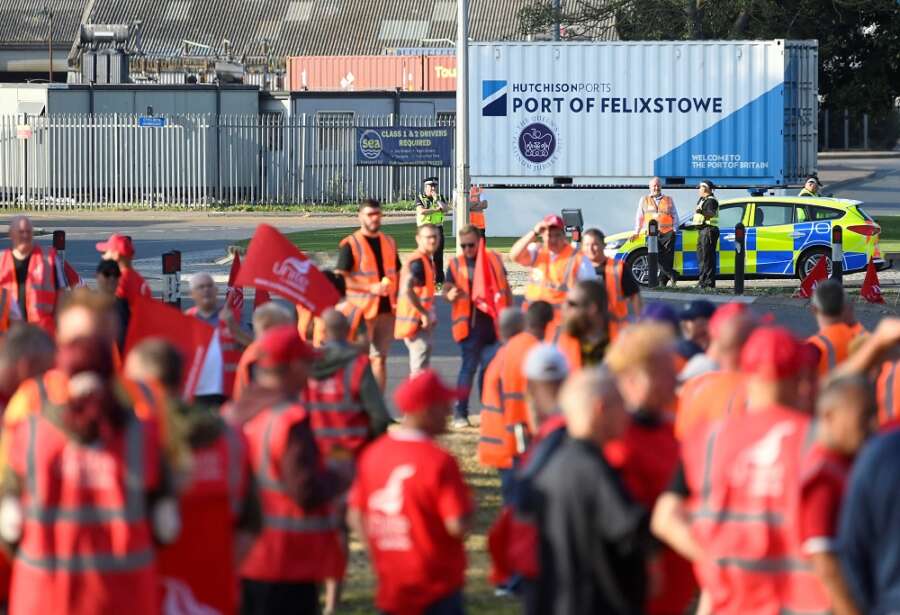 LONDON (Reuters) – More than 1,900 workers at Britain’s biggest container port, Felixstowe, have begun eight days of strike action that will cause disruption to trade and supply chains.

The staff at Felixstowe, on the east coast of England, are taking industrial action in a dispute over pay, becoming the latest workers to strike in Britain as unions demand higher wages for members facing a cost-of-living crisis.

Below is a look at Felixstowe’s operations and the possible impact from the strike:

HOW BIG IS THE PORT?

About 48% of all containers brought into the UK are transported through the Felixstowe port, according to the Unite union, making it an important import hub for Britain.

Britain’s biggest and busiest container port, and also one of Europe’s largest, Felixstowe handles more than 4 million ‘Twenty-foot Equivalent Units’ (TEUs) of goods and 2,000 ships arriving each year, according to its website.

Its container handling capacity is forecast to double to 8 million TEUs by 2030.

WHAT GOODS PASS THROUGH FELIXSTOWE?

In 2021, its top imports included toys, data processing machines, and wooden and metal furniture, according to OEC data. During May this year, the main imports were furniture, computers and automotive parts.

At 9.12 billion pounds ($10.8 billion), the port’s exports amounted only to about a quarter of its imports, OEC data showed. Exports during May this year included pharmaceutical products, scrap aluminium and copper.

In May, China was both the top origin and destination country for most goods transported through Felixstowe.

WHERE DO IMPORTED GOODS GO FROM THE PORT?

About 70% of containers transported through Felixstowe are delivered, via road and rail links, to a region in the middle of Britain known in the logistics trade as the “golden triangle”.

The triangle, which is within a four-hour drive of 90% of the British population, is home to the national distribution centres of many of Britain’s high street brands and retailers including Tesco, Asda and Marks and Spencer.

WHAT TRADE COULD BE AFFECTED BY THE STRIKE?

The strike could disrupt more than $800 million in trade including in clothing and electronic components, causing trade to be diverted to smaller UK ports as well as international ports including Wilhelmshaven in Germany, risk management firm Russell Group said.

WHAT IMPACT CAN CONSUMERS EXPECT?

Paul Davey, the head of corporate affairs at Hutchison Ports, the Hong Kong-based operator of Felixstowe, said that while local haulage firms would lose money from the strike, consumers around the country would not see a big impact.

“Most of the containers… are coming from the Far East. They are on long supply chains,” he told ITV on Monday. “It will be an impact but not massive.”

A spokesperson for Sainsbury’s said the retailer was monitoring the situation closely and had contingency plans in place to ensure products were available.

Retailers will try to reroute freight through other container ports or use alternative transport to ensure products remain available, said Andrew Opie, director of food and sustainability at the British Retail Consortium.

“Fresh food will be unaffected as most of it goes through the roll-on roll off-port at Dover,” Opie said.

(Reporting by Sachin Ravikumar in London and Yadarisa Shabong in Bengaluru; Editing by Gareth Jones)

Gas crisis sends euro back below parity against dollar