Home Headlines European airlines see travel withstanding consumer squeeze for now
Editorial & Advertiser disclosure
Our website publishes news, press releases, opinion and advertorials on various financial organizations, products and services which are commissioned from various Companies, Organizations, PR agencies, Bloggers etc. These commissioned articles are commercial in nature. This is not to be considered as financial advice and should be considered only for information purposes. It does not reflect the views or opinion of our website and is not to be considered an endorsement or a recommendation. We cannot guarantee the accuracy or applicability of any information provided with respect to your individual or personal circumstances. Please seek Professional advice from a qualified professional before making any financial decisions. We link to various third-party websites, affiliate sales networks, and to our advertising partners websites. When you view or click on certain links available on our articles, our partners may compensate us for displaying the content to you or make a purchase or fill a form. This will not incur any additional charges to you. To make things simpler for you to identity or distinguish advertised or sponsored articles or links, you may consider all articles or links hosted on our site as a commercial article placement. We will not be responsible for any loss you may suffer as a result of any omission or inaccuracy on the website.
Headlines 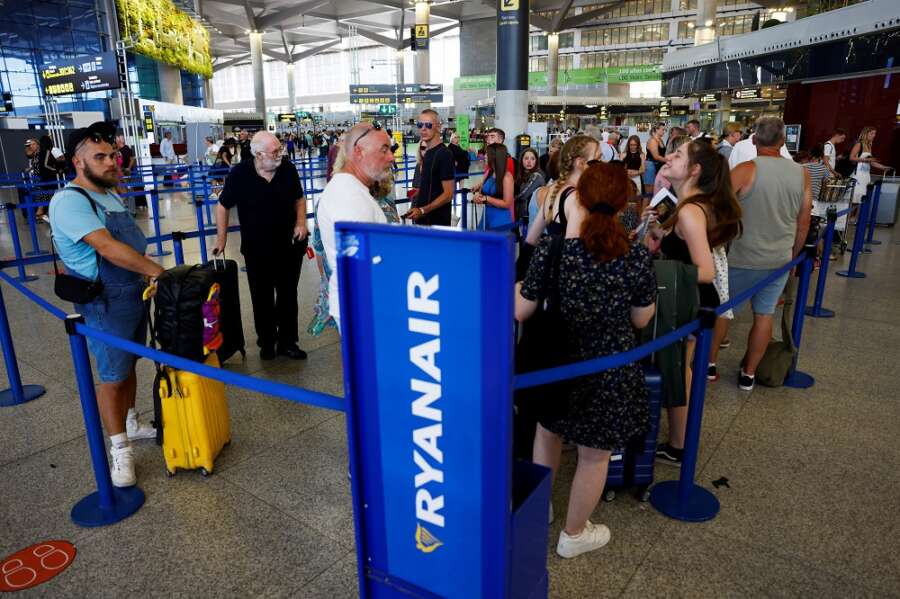 By Sarah Young and Klaus Lauer

Shares in IAG jumped as much as 10% after an unscheduled announcement on Thursday to report better than expected profit for its summer quarter and a confident outlook. Meanwhile, Ryanair said its bookings for the northern hemisphere autumn mid-term and Christmas holidays are ahead of pre-COVID levels and it sees average fares rising by more than expected until the end of March.

In Europe, most airline stocks have plunged over the last six months, some by as much as 50%, over worries that rising household bills will dampen appetite for travel.

But the airlines injected optimism back into the market on Thursday.

IAG, which also owns the Aer Lingus, Iberia and Vueling airlines, said forward bookings remain at expected levels for this time of year “with no indication of weakness”.

Johan Lundgren, chief executive of easyJet which had earlier issued forecasts for its annual results, was more cautious, saying that there was “uncertainty out there”, but the low-cost operator also said there was cause for optimism.

“Despite the difficulties that households have, we still know that holidays and travel are top of the list when people can prioritise what they want to do with their disposable income,” he told reporters.

Analysts noted that the strength of the dollar against the pound and the euro lately has made it cheaper for American visitors to come to Britain and Europe, a particular boost for IAG which has a large exposure to the transatlantic market.

Ryanair’s chief executive Michael O’Leary said that demand appeared to be supported by savings built up during the pandemic but he sounded a note of caution over how long that could endure, saying he does expect that customers’ disposable income will get hit by increases in interest rates and the cost of living further into the northern hemisphere winter.

That was echoed by Hargreaves Lansdown equity analyst Sophie Lund-Yates who said IAG’s upgrade was “a very welcome surprise, but whether the spritely mood music can be maintained is another question entirely”.