Home Headlines China’s Xi clinches third term, packs leadership with loyalists
Our website publishes news, press releases, opinion and advertorials on various financial organizations, products and services which are commissioned from various Companies, Organizations, PR agencies, Bloggers etc. These commissioned articles are commercial in nature. This is not to be considered as financial advice and should be considered only for information purposes. It does not reflect the views or opinion of our website and is not to be considered an endorsement or a recommendation. We cannot guarantee the accuracy or applicability of any information provided with respect to your individual or personal circumstances. Please seek Professional advice from a qualified professional before making any financial decisions. We link to various third-party websites, affiliate sales networks, and to our advertising partners websites. When you view or click on certain links available on our articles, our partners may compensate us for displaying the content to you or make a purchase or fill a form. This will not incur any additional charges to you. To make things simpler for you to identity or distinguish advertised or sponsored articles or links, you may consider all articles or links hosted on our site as a commercial article placement. We will not be responsible for any loss you may suffer as a result of any omission or inaccuracy on the website.
Headlines 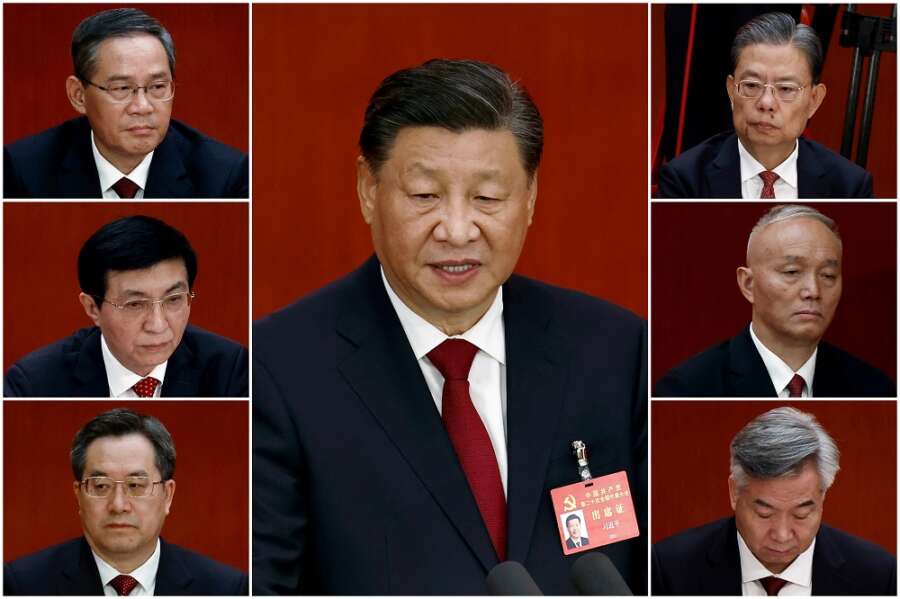 Shanghai Communist Party chief Li Qiang followed Xi onto the stage at the Great Hall of the People as the new Politburo Standing Committee was introduced, putting him in line to become premier when Li Keqiang retires in March.

The other members of the seven-man Standing Committee are Zhao Leji and Wang Huning, who return from the previous committee, and newcomers Cai Qi, Ding Xuexiang and Li Xi. Li Qiang is also new to the Standing Committee.

All are seen by analysts to have close allegiance to Xi, the son of a Communist Party revolutionary who has taken China in a more authoritarian direction since rising to power in 2012.

Richard McGregor, senior fellow for East Asia at the Lowy Institute think tank in Sydney, said the result was a resounding victory for Xi.

“All of his rivals, potential and real, have been forced out of the Politburo Standing Committee and Xi loyalists took their place. The new Politburo is an emphatic statement of Xi’s dominance over the party.”

The unveiling of the Standing Committee and the 24-member Politburo comes a day after the closing of the Communist Party’s 20th Congress, where amendments were added to the party charter cementing the core status of Xi and the guiding role of his political thought within the party.

Still, the 69-year-old Xi faces stiff challenges as the world’s second-largest economy slows and frustration over his zero-COVID policy grows. China is also increasingly estranged from the West, exacerbated by Xi’s support for Russia’s Vladimir Putin and mounting tensions over Taiwan.

“This is a leadership that will be focused on achieving Xi’s political goals, rather than pursuing their own agendas for what they think is best for the country,” said Drew Thompson, a visiting senior research fellow at the National University of Singapore’s Lee Kuan Yew School of Public Policy. “There is only one correct way to govern, and that is Xi’s way.”

“The results of the Party Congress fully confirm your high political authority, as well as the unity of the party you lead,” Putin told Xi, according to the Kremlin’s website.

As expected, the new Standing Committee line-up does not include a clear successor to Xi, whose predecessor Hu Jintao was unexpectedly escorted out of the congress closing ceremony on Saturday.

The ascension of Li Qiang, 63, to the number two spot, meanwhile, speaks to the importance of ties to Xi.

As Shanghai party chief, Li was a lightning rod for some of the public ire that made it past censors over the city’s grinding two-month COVID-19 lockdown earlier this year. But Li and Xi share a long history, including Li’s stint as Xi’s chief of staff when Xi was party chief in Zhejiang province.

Another new Standing Committee member is Xi’s private secretary and gatekeeper, Ding Xuexiang, who at 60 is the youngest on the new panel. Ding heads the party Central Committee’s powerful General Office, which manages the administrative affairs of the top leadership.

Cai Qi, 66, joins the Standing Committee from his post as Beijing party chief and is considered one of Xi’s closest political allies, having worked with him for 20 years in the coastal provinces of Fujian and Zhejiang.

The fourth newcomer is Li Xi, 66, party chief of economic powerhouse Guangdong province, who is also perceived by experts to be ideologically close to Xi, although they do not share a history of working together as the others do.

The unveiling comes a day after Li Keqiang and Wang Yang, seen by analysts as relative moderates that were young enough to serve longer in top decision-making bodies, were excluded from the wider Central Committee. Both have ties with the Communist Youth League, a once-influential group that experts say has lost power under Xi.

Another conspicuous absence from Sunday’s unveiling was Hu Chunhua, a vice premier who had been considered by some party-watchers as a candidate for the premiership and who also has Youth League roots. Hu, 59, was not chosen to return to the Politburo.

Also missing from the Politburo: any women. The lone woman on the last Politburo, Sun Chunlan, retired after two terms.

Xi laid the groundwork to rule beyond a decade when he eliminated the two-term limit on the presidency in 2018. His term as president is likely to be renewed at the annual parliamentary session in March, where the next premier will also be officially named.

“His autocracy may provoke stronger international pushback from the U.S.-led Western countries. All of these scenarios will make his third and likely fourth terms not as easy as expected,” he said.