Home Headlines China’s big cities, from Dalian to Shenzhen, ramp up COVID curbs
Our website publishes news, press releases, opinion and advertorials on various financial organizations, products and services which are commissioned from various Companies, Organizations, PR agencies, Bloggers etc. These commissioned articles are commercial in nature. This is not to be considered as financial advice and should be considered only for information purposes. It does not reflect the views or opinion of our website and is not to be considered an endorsement or a recommendation. We cannot guarantee the accuracy or applicability of any information provided with respect to your individual or personal circumstances. Please seek Professional advice from a qualified professional before making any financial decisions. We link to various third-party websites, affiliate sales networks, and to our advertising partners websites. When you view or click on certain links available on our articles, our partners may compensate us for displaying the content to you or make a purchase or fill a form. This will not incur any additional charges to you. To make things simpler for you to identity or distinguish advertised or sponsored articles or links, you may consider all articles or links hosted on our site as a commercial article placement. We will not be responsible for any loss you may suffer as a result of any omission or inaccuracy on the website.
Headlines 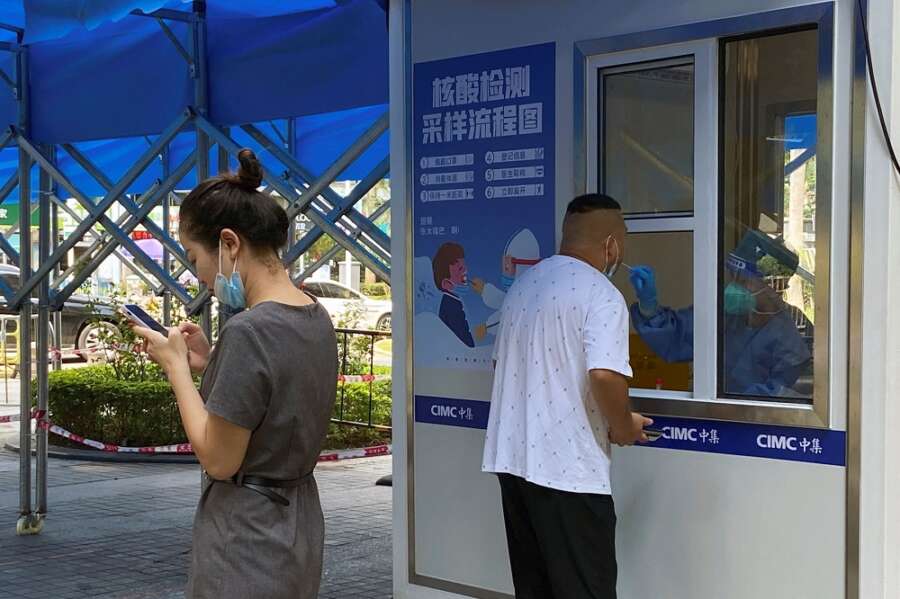 Metropolises from the southern tech hub of Shenzhen to southwestern Chengdu and the northeastern port of Dalian ordered measures such as lockdowns in big districts and business closures aimed at stamping out fresh outbreaks.

The latest curbs, which will delay the start of the school year for some, reflect China’s strict adherence to a “dynamic COVID zero” policy of quashing every flare-up.

That insistence makes it an outlier as the rest of the world tries to live with coronavirus despite the cost to the world’s second-largest economy.

While many of the measures are initially planned to run just a few days, any major escalation or extension in some of China’s biggest cities risks further hurting already tepid growth.

While the two most populous cities of Beijing and Shanghai have faced only sporadic cases recently, COVID worries still weighed on Chinese stocks.

“Markets could once again be hit in the next couple of weeks, likely triggering another round of cuts by economists on the street,” Nomura warned in a note, highlighting the significance of cities such as Shenzhen, also a major port.

On Tuesday, the Shenzhen district of Longhua, which has 2.5 million residents, closed entertainment venues and wholesale markets, and suspended large events.

People must show proof of negative test results within 24 hours to enter residential compounds, and restaurants must limit patrons to half of capacity, Longhua’s district authorities said. The new curbs will run until Saturday.

The moves followed similar measures on Monday covering three other districts that affected over 6 million in Shenzhen, which has fought outbreaks of Omicron sub-variants this year.

City officials have stopped short of a blanket delay for the new school year, but six parents of young children said their schools had told them of postponements, as many in parent chat groups expressed anxiety over the uncertainty.

In Dalian, a major import hub for soybeans and iron ore, a lockdown begun on Tuesday is set to run until Sunday in the main urban areas with about 3 million residents. Households may send one person each day to shop for daily needs.

The lockdown requires non-essential workers to work from home, while manufacturing companies must cut on-site staff and maintain only basic and urgent operations.

The southwestern city of Chengdu, with a population of 21 million, ordered blanket closure of public entertainment and cultural venues from Tuesday.

It planned to delay the start of the fall school semester, and mandated residents to have proof of negative test result within 24 hours for entry to certain areas.

The northern municipality of Tianjin, home to 13.7 million, started a new round of citywide COVID testing, its fourth since Saturday.

The city of Tianjin said it would delay resuming offline classes for many schools.

In the northern city of Shijiazhuang, about 3-1/2-hours drive from Beijing, four big districts have ordered more than 3 million people to work from home until Wednesday afternoon, except for those in essential jobs.

From more than 20 places that reported infections for Monday, Tibet, Qinghai and the province of Sichuan, of which Chengdu is the capital, accounted for the bulk of daily cases.

Qinghai’s capital of Xining, with a population of 2.5 million, ordered a lockdown from Monday until Thursday morning in key urban areas, halting public transport and limiting movement.

Cases have been rising in Hong Kong, which does not have the same zero-COVID measures as mainland China, with government advisers expecting a daily tally of 10,000 infections this week, fanning fears of a tightening of just-eased curbs.