Home Headlines Carrefour unveils 30 euro shopping basket in Spain after government price cut proposal
Our website publishes news, press releases, opinion and advertorials on various financial organizations, products and services which are commissioned from various Companies, Organizations, PR agencies, Bloggers etc. These commissioned articles are commercial in nature. This is not to be considered as financial advice and should be considered only for information purposes. It does not reflect the views or opinion of our website and is not to be considered an endorsement or a recommendation. We cannot guarantee the accuracy or applicability of any information provided with respect to your individual or personal circumstances. Please seek Professional advice from a qualified professional before making any financial decisions. We link to various third-party websites, affiliate sales networks, and to our advertising partners websites. When you view or click on certain links available on our articles, our partners may compensate us for displaying the content to you or make a purchase or fill a form. This will not incur any additional charges to you. To make things simpler for you to identity or distinguish advertised or sponsored articles or links, you may consider all articles or links hosted on our site as a commercial article placement. We will not be responsible for any loss you may suffer as a result of any omission or inaccuracy on the website.
Headlines 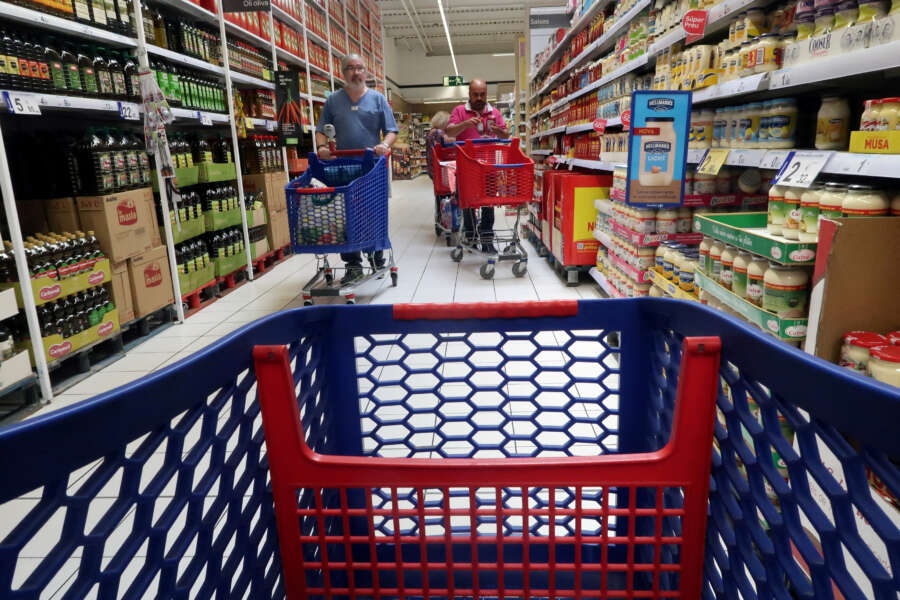 The government’s announcement was met with criticism by Spanish business groups and some politicians who view the move as the government engaging in price intervention.

Labour Minister Yolanda Diaz, who announced she was seeking agreements with supermarkets on Monday, has denied these criticisms, saying it will help impoverished families continue to eat healthily.

Diaz, one of Spain’s three deputy prime ministers and the most senior government official from its junior, far-left coalition partner Unidas Podemos, told Spain’s Eldiario.es news outlet an agreement would determine a basket of basic products in which they can set prices.

French retailer Carrefour – the second-largest grocery chain in Spain after dominant Mercadona – said it hoped to bolster the purchasing power of Spanish families. The exclusive basket offer will include tinned food, pasta, oil and coffee among other products.

The main employers’ association, the CEOE, denounced Carrefour’s move as “soviet,” while Spain’s agriculture minister, a member of coalition leader Socialist Party (PSOE), said under European law, price interventions could only be adopted in regulated markets. The agri-food sector has called for a food tax reduction.

Diaz told journalists on Wednesday she had never mentioned price interventions, but rather “an agreement between retailers and consumer and user associations to do something… completely legal.”

Inflation hit 10.3% in August in Spain. In July, flour marked a price rise of almost 40%, and pasta, eggs or milk exceeded price increases of 22%.

In August, Carrefour said it was freezing the price of 100 products in France, from tinned sardines to rice and washing up liquid.

Spain’s government has already committed 30 billion euros to measures aimed at high energy costs such as with fuel rebates and VAT reductions for gas and electricity.

In June, Spain capped the price of gas used to produce electricity, a move now being studied for replication in the rest of the bloc’s countries.

Another popular measure has been the launch of free rail passes and discounts on public transport in cities.