Home Headlines Britain’s market rout stokes contagion fears around the globe
Editorial & Advertiser disclosure
Our website publishes news, press releases, opinion and advertorials on various financial organizations, products and services which are commissioned from various Companies, Organizations, PR agencies, Bloggers etc. These commissioned articles are commercial in nature. This is not to be considered as financial advice and should be considered only for information purposes. It does not reflect the views or opinion of our website and is not to be considered an endorsement or a recommendation. We cannot guarantee the accuracy or applicability of any information provided with respect to your individual or personal circumstances. Please seek Professional advice from a qualified professional before making any financial decisions. We link to various third-party websites, affiliate sales networks, and to our advertising partners websites. When you view or click on certain links available on our articles, our partners may compensate us for displaying the content to you or make a purchase or fill a form. This will not incur any additional charges to you. To make things simpler for you to identity or distinguish advertised or sponsored articles or links, you may consider all articles or links hosted on our site as a commercial article placement. We will not be responsible for any loss you may suffer as a result of any omission or inaccuracy on the website.
Headlines

NEW YORK/LONDON (Reuters) – The scale and speed of the sell-off in British assets has jolted world markets, raising concern about contagion as chaos in a major developed economy adds to unease already generated by sharp interest rate rises from the United States and elsewhere.

Following Friday’s UK mini-budget, which flagged 45 billion pounds’ ($48 billion) worth of unfunded tax cuts, sterling tumbled to record lows while British bond prices slid. Signs of dislocation were apparent on Wednesday before the Bank of England (BoE) stepped in to calm markets.

Markets had already been unnerved by an energy shock that has fuelled inflation and a strong dollar that is creating headwinds globally and which prompted a rare Bank of Japan intervention in currency markets just last week.

“It is like having a sand castle where bits and pieces start falling off all together,” Olivier Marciot, head of investments for multi assets and wealth management at Unigestion, said, referring to Britain contributing to global stress. “I think the UK is one of those pieces … It is just adding to the pain, adding to the stress.” 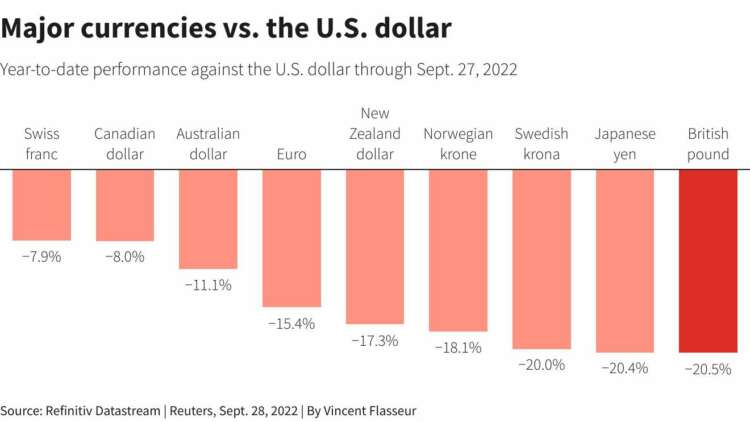 Concern about the UK’s new economic policy has added to the already heightened volatility, with a rout in gilts spilling over into even safe-haven U.S. Treasuries and top-rated German bonds.

Clearly, global angst is rising about the spillover from Britain. Atlanta Fed President Raphael Bostic on Monday warned events in the United Kingdom could lead to greater economic stress in Europe and the United States, while the International Monetary Fund on Tuesday took aim at new British financial plans. U.S. Treasury Secretary Janet Yellen said on Tuesday the United States was monitoring developments in Britain, the Financial Times reported.

“There will be impacts, there’s correlations … some market volatility, and then how it weighs in the global growth picture,” said Paul Malloy, head of municipals at Vanguard. “The U.S. is a broadly insulated economy … we’re a lot more insulated from a lot of global pressures, but with that said, we’re not completely immune from what happens in Europe, China and the UK.”

PIMCO’s chief investment officer, Dan Ivascyn, said that although he believed developments in the UK did not represent significant systemic risks, they did add to volatility in already volatile markets.

The ICE BofA Move Index, a measure of volatility in the U.S. fixed income market, has also jumped to its highest level since March 2020.

The wild swings in the pound have ricocheted across currency markets, where volatility was already climbing. According to the widely watched Deutsche Bank Currency Volatility Index, volatility across currencies on Wednesday hit its highest level since the March 2020 COVID-19- induced market meltdown, jumping more than 20% from levels last week.

The BoE’s announcement on Wednesday that it would buy as many long-dated government bonds as needed between now and Oct. 14 to stabilise markets brought some calm.

Not all investors thought it was the best approach, however, with Stanley Druckenmiller of Duquesne Family Office saying the bond buying was not appropriate in the inflationary environment.

Closely followed indicators of financial stress remain contained. Borrowing costs for U.S. dollars in currency derivatives markets have risen sharply this week but remain well below levels hit after Russia’s invasion of Ukraine in February and the COVID-19 market rout in March 2020.

U.S. stock market volatility as measured by the “fear index,” the VIX, has also climbed in recent days but remains below its 2022 highs.

But the risk of contagion remains given the backdrop of global uncertainty and the higher global interest rates.

“Markets are selling off, central banks are very hawkish … and that sense of confusion means moves have a tendency to self-feed,” said Charles Diebel, head of fixed income strategy at Mediolanum Asset Management.

Michael Purves, chief executive at Tallbacken Capital Advisors in New York, said some of the equity weakness might be related to the UK as volatility there prompts “de-risking,” including the selling of U.S. government bonds.

In times of acute stress such as during the March 2020 COVID-triggered market meltdown, investors sell even safe-haven assets such as Treasuries to shore up liquidity and make up for losses elsewhere in their portfolios.

Britain is the world’s sixth-biggest economy and around 5% of the world’s currency reserves are denominated in sterling, highlighting the UK’s importance in the global financial system.

With aggressive U.S. rate hikes already causing strain across world markets, for instance through a strong dollar, talk of a global response to calm markets is also growing.

“(To) contain inflation we need a global response, and that global response needs to be to calm down demand,” said Padhraic Garvey, global head of debt and rates strategy at ING Americas. “Clearly, as a standalone issue, when the UK prime minister and administration loosens policy on the fiscal side, that doesn’t, by definition, calm demand.”