Home Finance BoE’s Saunders worries inflation will be higher than forecasts
Editorial & Advertiser disclosure
Our website publishes news, press releases, opinion and advertorials on various financial organizations, products and services which are commissioned from various Companies, Organizations, PR agencies, Bloggers etc. These commissioned articles are commercial in nature. This is not to be considered as financial advice and should be considered only for information purposes. It does not reflect the views or opinion of our website and is not to be considered an endorsement or a recommendation. We cannot guarantee the accuracy or applicability of any information provided with respect to your individual or personal circumstances. Please seek Professional advice from a qualified professional before making any financial decisions. We link to various third-party websites, affiliate sales networks, and to our advertising partners websites. When you view or click on certain links available on our articles, our partners may compensate us for displaying the content to you or make a purchase or fill a form. This will not incur any additional charges to you. To make things simpler for you to identity or distinguish advertised or sponsored articles or links, you may consider all articles or links hosted on our site as a commercial article placement. We will not be responsible for any loss you may suffer as a result of any omission or inaccuracy on the website.
Finance

BoE’s Saunders worries inflation will be higher than forecasts 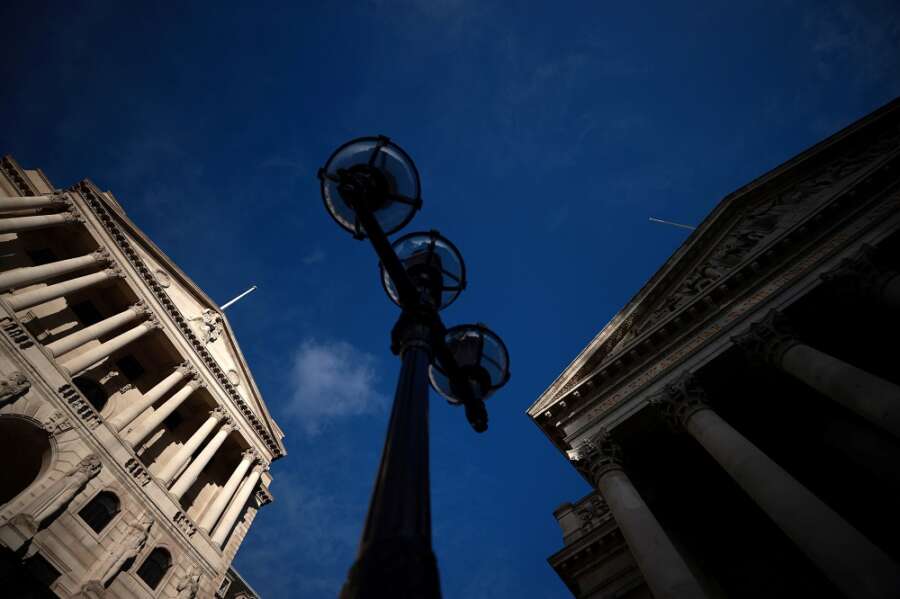 By David Milliken and William Schomberg

LONDON (Reuters) -Bank of England policymaker Michael Saunders, who called in vain for a big interest rate hike last week, said inflation risked exceeding BoE forecasts that already go above 10%, and urged the BoE to “lean heavily” against it.

With price growth already more than three times the BoE’s 2% target, Saunders and two other members of the nine-strong Monetary Policy Committee voted to raise Bank Rate from 0.75% to 1.25% at their meeting last week.

But a majority of six members backed a smaller rise to 1.0% as they worried about signs of an economic slowdown.

Saunders said in a speech that he put “considerable weight” on the risk that inflation pressures would probably be greater and more persistent than expected by the BoE.

He told an audience at the Resolution Foundation think tank that the BoE should “lean strongly” against high inflation expectations because “the process of re-anchoring price expectations could be very costly in economic terms”.

Key measures of longer-term price growth expectations were uncomfortably high and were feeding into underlying pay growth and services inflation.

“The strength of external costs is eroding real incomes and is likely to cap real spending,” Saunders said, acknowledging the concerns of his colleagues.

“But, by creating a long period of above-target inflation, these external cost increases also may exacerbate the rise in inflation expectations and hence, with the tight labour market, could make it harder to ensure domestic inflation pressures return to a target-consistent pace.”

Britain’s consumer prices rose by 7.0% in the 12 months to March – a 30-year high – and the BoE said last week that inflation was likely to peak at more than 10% later this year, causing a sharp economic slowdown or possibly a recession.

“That credibility is not infinite and cannot be taken for granted,” he said.

As well as the inflationary pressures hitting many other global economies, Britain also had to contend with the fallout from its departure from the European Union and its single market which had hurt investment and productivity, he said.

He also said the neutral rate of interest – the level at which it neither stimulates nor restrains demand – might be somewhere in the range of 1.25% to 2.5%.

Replying to a question after his speech, Saunders said financial markets were pricing that kind of range for Bank Rate over the next five years and he was inclined think that was suitable for estimating the neutral rate.

Saunders voted for a 50 basis-point rate hike in February as well as last week but backed a 25 basis-point increase in March. He told reporters that his May decision was based on the calmer conditions in financial markets at that point.

BoE’s Saunders worries inflation will be higher than forecasts