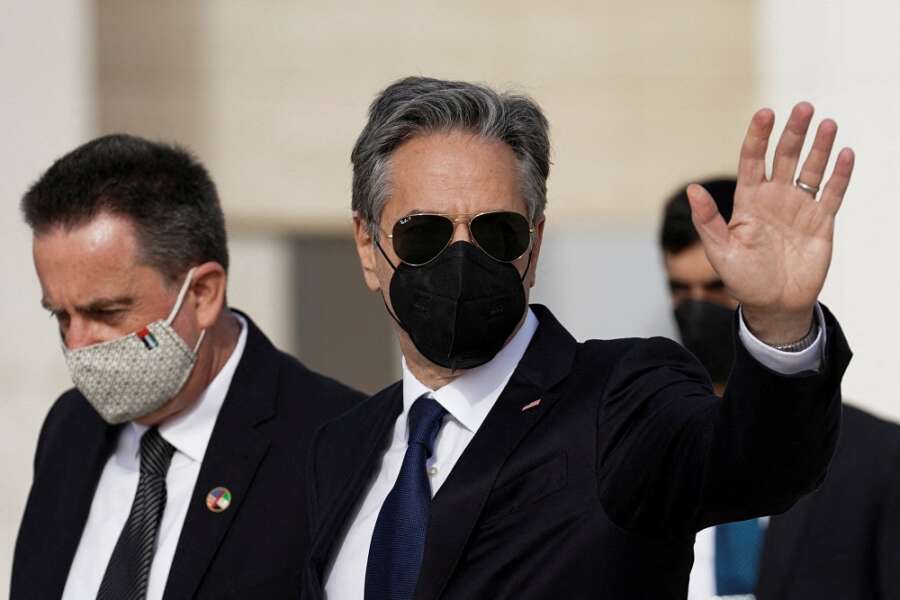 ABU DHABI (Reuters) – President Joe Biden is sending an all-star U.S. delegation to the United Arab Emirates on Monday to offer condolences after the death of its ruler, in an apparent bid to step up efforts to repair frayed ties with Gulf Arab allies.

Washington’s desire to improve ties with Gulf monarchies has gained renewed urgency following Russia’s invasion of Ukraine, which highlighted the relevance of Gulf oil producers as Europe looks to cut its energy dependence on Russia.

Since the weekend, world leaders have descended on the UAE to greet new leader Sheikh Mohammed bin Zayed al-Nahyan and pay their respects on the death of President Khalifa bin Zayed.

The U.S. delegation, headed by Vice President Kamala Harris, includes nearly all Biden’s top national security aides, from the secretaries of state and defense and the head of the Central Intelligence Agency to high-ranking White House officials.

“This is a major charm offensive on the part of the Biden administration to repair relations,” said Omer Taspinar, a policy expert at the Brookings Institution think tank.

Gulf states have so far refused to take sides in the Ukraine conflict. OPEC heavyweights Saudi Arabia and the UAE also resisted calls to hike output to help tame crude prices that have aggravated inflation worldwide.

The make-up of the delegation reflects Washington’s desire to show its commitment to the region, senior U.S. officials say.

Harris will emphasize the intent to deepen ties across areas ranging from security and climate to space, energy and commerce, they added.

The Middle East had not been a priority for the Biden administration, whose primary focus had been on tackling the China challenge, and since February, the U.S. foreign policy agenda had been dominated by the Ukraine conflict.

“There is an attempt to put things back on track after UAE frustration with the United States by the absence of high-level visits in the aftermath of Houthi attacks,” Taspinar added.

The Emiratis were particularly frustrated by what they saw as lack of strong U.S. support in the aftermath of missile attacks in January by Yemen’s Iran-aligned Houthis on Abu Dhabi.

In a rare public admission in March the UAE envoy to Washington said the two nations’ ties were under stress.

Reuters has reported that Biden upset Sheikh Mohammed by not calling swiftly after the attacks and not responding more forcefully, including by reinstating a terrorist designation on the Houthis.

“The seniority and size of the U.S. delegation is a very telling signal and will be meaningful to Sheikh Mohammed and the UAE leadership,” said a source familiar with Emirati thinking.

At a meeting with Sheikh Mohammed in Morocco in March, Secretary of State Antony Blinken assured the Emirati leader of Washington’s commitment to the region.

Gulf states have chafed at perceived declining U.S. commitment to their security in the face of Iran’s missile programme and network of regional proxies.

The UAE is at the same time engaging with Tehran to contain tension. Iran’s foreign minister was due in Abu Dhabi on Monday.

Abu Dhabi and Riyadh have also been frustrated by conditions on U.S. weapons sales. In December, the UAE said it would suspend talks on purchases of U.S.-made F-35 fighter jets because of conditions related to the sale.

The UAE says the United States remains a strategic partner even as it deepens ties with China and Russia.

“There is progress, (but also) more to do. The UAE wants a closer and more clearly defined relationship with the U.S.,” the UAE source said.

(Reporting by Humeyra Pamuk; Additional reporting by Ghaida Ghantous in Dubai and Trevor Hunnicutt in Washington; Editing by Clarence Fernandez)