Home Headlines Analysis – Turbulent UK bond market may force BoE’s hand again
Our website publishes news, press releases, opinion and advertorials on various financial organizations, products and services which are commissioned from various Companies, Organizations, PR agencies, Bloggers etc. These commissioned articles are commercial in nature. This is not to be considered as financial advice and should be considered only for information purposes. It does not reflect the views or opinion of our website and is not to be considered an endorsement or a recommendation. We cannot guarantee the accuracy or applicability of any information provided with respect to your individual or personal circumstances. Please seek Professional advice from a qualified professional before making any financial decisions. We link to various third-party websites, affiliate sales networks, and to our advertising partners websites. When you view or click on certain links available on our articles, our partners may compensate us for displaying the content to you or make a purchase or fill a form. This will not incur any additional charges to you. To make things simpler for you to identity or distinguish advertised or sponsored articles or links, you may consider all articles or links hosted on our site as a commercial article placement. We will not be responsible for any loss you may suffer as a result of any omission or inaccuracy on the website.
Headlines 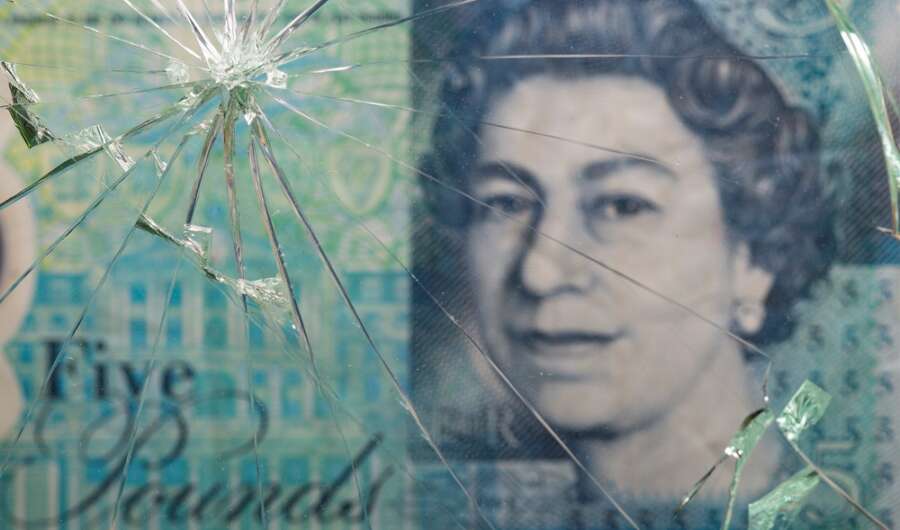 By Dhara Ranasinghe and Harry Robertson

LONDON (Reuters) – Bank of England Governor Andrew Bailey has been unequivocal: the central bank will end emergency support for bonds on Friday. Yet with markets showing few signs of stabilising, the BoE may have little choice but to come back with more.

The central bank is caught between a rock and a hard place.

On the one hand it is navigating what it has called a “material risk to financial stability” with the gilt market rout exposing vulnerabilities in the pensions sector.

But buying bonds doesn’t sit well with the BoE’s mandate to control surging inflation and BoE officials are anxious to avoid giving the impression that they are buying bonds to support the fiscal plans of the government.

Investors suspect the need to avoid further turmoil will prevail for now and the BoE will continue to buy bonds, even if not immediately after Friday’s deadline.

“Ultimately the Bank of England is tasked with creating financial stability. And what they can’t allow is for the bond market to be overly volatile,” said Iain Stealey, CIO of fixed income at JPMorgan Asset Management.

“So, I think they will probably stop this current iteration of the support come Friday. That doesn’t mean that they won’t be back if you do see a lot of volatility come next week.”

Britain’s 30-year gilt yield is back above 5% for the first time since the BoE began buying bonds on Sept. 28 to calm turmoil triggered by Prime Minister Liz Truss’s tax cut plans which raised concerns about potentially unsustainable borrowing.

It has shot up over 100 basis points (bps) so far in October, after surging 75 bps last month. U.S. and German 30-year borrowing costs are up just 16 and 33 bps respectively this month and the contrast highlights the scale of selling gripping Britain’s bond market.

Policymakers also have their eye on sterling, which has crawled back from recent record lows near $1.03. But the pound, which fell on Bailey’s latest comments, is down almost 20% this year and further weakness would exacerbate inflation and add to pressure on the BoE to hike rates further.

Money markets are pricing in a hefty 100 bps rate hike at the BoE’s November meeting. 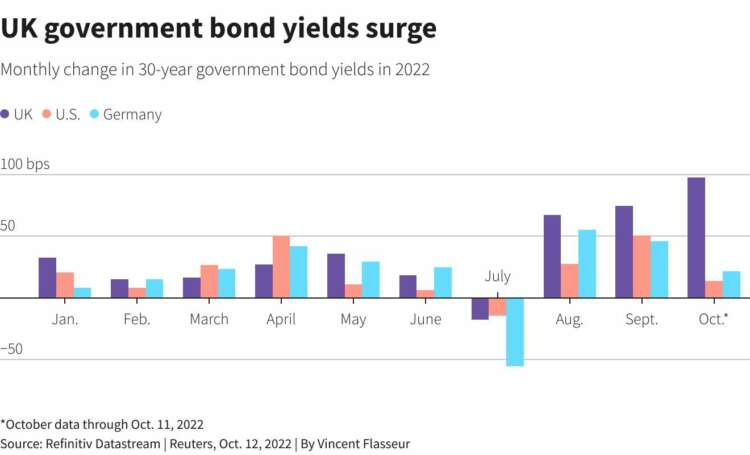 At the heart of whether the BoE will have to step back into the market is whether the pace of selling by pension funds abates.

The unprecedented bond market moves triggered hefty collateral calls on hedging strategies that many funds are still struggling to meet.

“Bailey has to give the message that the BoE is ready to walk away but fundamentally there has to be a big question mark over that and whether the BoE carries on, or whether financial stability risks continue and the BoE comes back to the market,” said Chris Scicluna, head of economic research at Daiwa Capital Markets.

The BoE this week introduced a repo facility for banks to ease pressures facing client funds caught up in the turmoil. It will run until Nov. 10.

Bond market volatility has also raised doubts about whether the BoE can press ahead with its plan to sell some of its bond holdings, a process known as quantitative tightening (QT).

The BoE originally planned to start QT in early October but pushed the launch back until Oct. 31 as it launched its emergency bond-buying programme.

“It would not be sensible for the bank to just plough ahead with QT if we are seeing elevated volatility. It might be the case that they delay QT further,” said Stealey at JPMorgan Asset Management.

Others said sentiment was unlikely to improve until confidence in the government’s growth and fiscal plans was restored. British finance minister Kwasi Kwarteng has said he will deliver those plans on Oct. 31.

The BoE should consider continuing the emergency bond-buying programme to Oct. 31 “and possibly beyond”, the Pensions and Lifetime Savings Association said on Tuesday.

For Nikesh Patel, head of client solutions at Kempen Capital Management, extending the bond-buying scheme beyond Friday may not be enough.

He said pension schemes were spinning in a “merry go-round” as they sold gilts to raise cash to put back on hedges that will buy gilts. The circular nature of it has bunged up the market, he said, with little buying or selling taking place and market liquidity poor.

The BoE has bought a total of more than 13 billion pounds of gilts of at least 20 years’ maturity since the operations started on Sept. 28. It raised its daily maximum purchase total to 10 billion pounds a day on Monday.

“I don’t think extending at this point is enough. The time has passed for extending to be enough. It needs to be something with a much bigger bang,” Patel said.