Home Headlines Bank of England set for second hefty rate rise in a row
Editorial & Advertiser disclosure
Our website publishes news, press releases, opinion and advertorials on various financial organizations, products and services which are commissioned from various Companies, Organizations, PR agencies, Bloggers etc. These commissioned articles are commercial in nature. This is not to be considered as financial advice and should be considered only for information purposes. It does not reflect the views or opinion of our website and is not to be considered an endorsement or a recommendation. We cannot guarantee the accuracy or applicability of any information provided with respect to your individual or personal circumstances. Please seek Professional advice from a qualified professional before making any financial decisions. We link to various third-party websites, affiliate sales networks, and to our advertising partners websites. When you view or click on certain links available on our articles, our partners may compensate us for displaying the content to you or make a purchase or fill a form. This will not incur any additional charges to you. To make things simpler for you to identity or distinguish advertised or sponsored articles or links, you may consider all articles or links hosted on our site as a commercial article placement. We will not be responsible for any loss you may suffer as a result of any omission or inaccuracy on the website.
Headlines 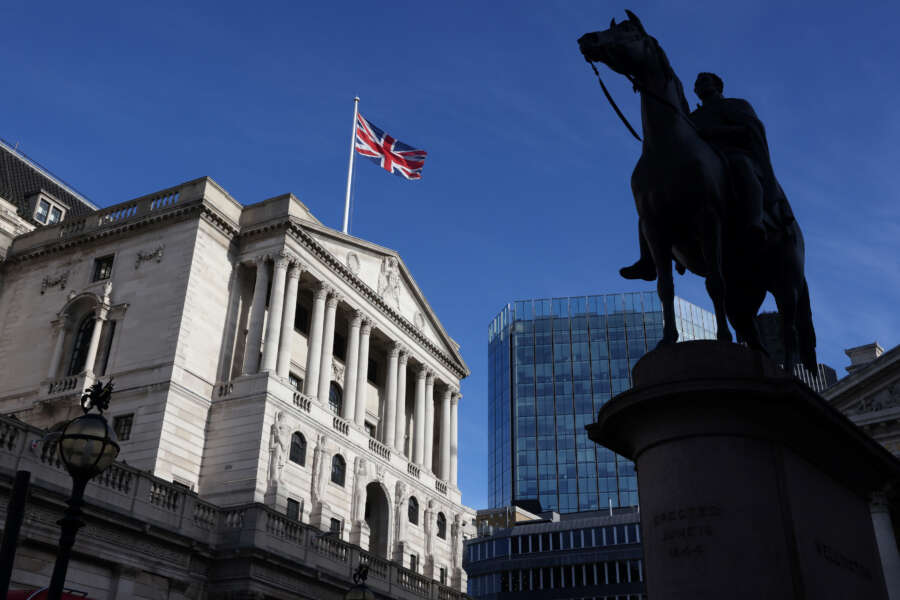 LONDON (Reuters) – The Bank of England looks set to raise interest rates by at least half a percentage point on Thursday in a bid to tame inflation that is just off a 40-year high, against a backdrop of a tumbling currency and a free-spending government.

Economists polled by Reuters last week expect the BoE to announce at 1200 GMT that rates will rise to 2.25% from 1.75%, while financial markets have priced in a bigger move to 2.5%.

The BoE is also expected to confirm that it will soon sell some of the 838 billion pounds ($944 billion) of government bonds which it bought during more than a decade of quantitative easing – the first major central bank to do so.

The BoE’s half-point increase in rates last month was its biggest since 1995. If it raises rates by three-quarters of a point on Thursday it would be the largest hike since 1989, barring a failed, temporary attempt to shore up sterling in 1992.

The U.S. Federal Reserve increased its main interest rate by three-quarters of a percentage point on Wednesday and signalled more large increases to come.

Sterling sank to its lowest since 1985 against the U.S. dollar after the Fed decision and is at its lowest against a basket of currencies since 2020, pushing up the price of imports.

Central banks globally have been hiking rates to tackle inflation caused by the surge in energy prices following Russia’s invasion of Ukraine, as well as supply-chain pressures and labour shortages since the COVID-19 pandemic.

The BoE was the first major central bank to raise rates in the current cycle, beginning in December last year.

Britain’s annual rate of consumer price inflation edged down to 9.9% in August from a 40-year high of 10.1% in July, its first drop in nearly a year though still far above the BoE’s 2% target and the highest in the Group of Seven.

The short-term outlook for inflation is now somewhat better than at the time of the BoE’s last meeting in early August.

New Prime Minister Liz Truss’s caps on household and business energy tariffs mean inflation is unlikely to rise as high as the 13.3% peak the BoE had pencilled in for October, or rates of more than 15% which economists expected for early 2023.

However, the caps – combined with likely cuts to taxes on employment, business profits and potentially house purchases – amount to more than 150 billion pounds of economic stimulus that was not factored into the BoE’s forecasts last month.

This, in turn, could prompt the BoE to raise rates more than previously thought over the coming year, despite what will still be a big squeeze on living standards from high inflation.

“Although the immediate risk of recession over the coming winter is diminished, substantial fiscal stimulus adds to the risk of high inflation being maintained for longer – and hence the chances of, ultimately, substantially more policy tightening by the Bank of England being required,” Investec economist Sandra Horsfield said.

New finance minister Kwasi Kwarteng will set out more details of the budget plans on Friday, including an update to debt issuance.

Last month, the BoE forecast the economy would enter recession in the final quarter of 2022 and shrink throughout 2023.

A recession of this length now looks unlikely, economists say, but there is a risk – following contraction in the second quarter and weak retail sales and business survey data since – that the economy is already in a technical recession.

A public holiday to mark Queen Elizabeth’s funeral, following more than a week of national mourning that led to the cancellation of some public events, will also reduce third-quarter output. The BoE also decided to delay by a week its policy announcement, which had been due out on Sept. 15.